Media Giant iHeart: 'We Are Looking at Only Diverse Hires at This Time' 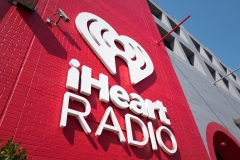 Featured is a sign for iHeartRadio music radio, part of the iHeartMedia company, at the company's local headquarters in the South of Market (SoMa) neighborhood of San Francisco, Calif. (Photo credit: Smith Collection/Gado/Getty Images)

An executive producer at America's largest owner of radio stations, iHeartMedia, advertised a job Thursday by stating "we are looking at only diverse hires at this time."

Molly Socha, executive producer of custom podcasts at iHeartMedia, made the statement in an email sent to a listserv interested in the New York City radio industry and obtained by CNSNews.

"Diversity is incredibly important to our team and our company so we are looking at only diverse hires at this time," Socha said while describing the podcast editor/engineer position to members of the listserv.

While the iHeartMedia producer made this stipulation in her email, it apparently is nowhere to be found in the public listing for the job. Instead, the public announcement states that iHeartMedia "is an equal opportunity employer and will not tolerate discrimination in employment on the basis of race, color, age, sex, sexual orientation, gender identity or expression, religion, disability, ethnicity, national origin, marital status, protected veteran status, genetic information, or any other legally protected classification or status."

In 2018,  When the British Broadcasting Corporation (BBC) sought a trainee multimedia journalist, the solicitation explicitly stated that the role was "for people from a black, Asian, or non-white ethnic minority background."

Newsbeat is looking for a Trainee Multi-Media Journalist. This is a @_CreativeAccess scheme for people from a black, Asian or non-white ethnic minority background. Know anyone who'd be suitable? Share this with them! Full details here: https://t.co/uS5WORiz27 pic.twitter.com/wh05k7CsYu

CNS News reached out both to Socha and iHeartMedia corporate headquarters by both phone and email, but did not receive any comment before this story was posted.

Update (5:50pm EST): Socha emailed the NYC radio listserv shortly after being contacted by CNSNews with the following statement:

I made an error in language in my last note, so I just want to clarify,  ALL are welcome to apply and we will consider ALL qualified candidates. That being said, in our efforts to elevate diverse voices in the predominately white podcast space, we strongly encourage engineers/editors of color––regardless of gender and sexual orientation–– to apply.