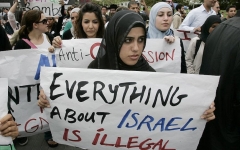 (CNS News) -- The Coalition for Jewish Values (CJV), which represents more than 2,000 traditional, Orthodox rabbis in matters of American public policy, denounced a new Amnesty International report that paints Israel as an apartheid state, and charged the organization with being an "antisemitic hate group."

The report, released on Feb. 1, is entitled, Israel's Apartheid Against Palestinians: Cruel System of Domination and Crime Against Humanity.

Apartheid was the system of social and legal discrimination instituted in South Africa from 1950 to the early 1990s, which separated black Africans from the white minority that ruled the country. After apartheid ended, Nelson Mandela became South Africa's president.

The report states, "The organization [Amnesty International] has concluded that Israel has perpetrated the international wrong of apartheid, as a human rights violation and a violation of public international law wherever it imposes this system. It has assessed that almost all of Israel’s civilian administration and military authorities, as well as governmental and quasi-governmental institutions, are involved in the enforcement of the system of apartheid against Palestinians across Israel and the OPT [Occupied Palestinian Territory] and against Palestinian refugees and their descendants outside the territory."

In a statement, Rabbi Yaakov Menken, managing director of the Coalition for Jewish Values, said, "The Amnesty International report, which we have seen and examined, is openly antisemitic. No one should pretend it is about a political dispute when it is rife with hatred against individual Jews.

"The report begins with a reference to 'Sheikh Jarrah, a Palestinian residential neighbourhood near the Old City.' Amnesty fails to note that the neighborhood’s original name is Shimon HaTzaddik, that Jews built the homes there, that the legal, Jewish residents were ethnically cleansed out by the Jordanian Army in 1948, and that the Arab squatters are refusing to pay rent for homes they illegally occupy. No legitimate human rights organization would omit these facts.

"The report refers to Israel’s 1967 'military occupation' after the Six Day War without noting, again, that Jews were returning to land from which they were ethnically cleansed by the Jordanian and Egyptian armies, and that the Arab armies’ declared intent was not merely to destroy the country but to massacre its Jewish inhabitants.

"The report similarly omits that Hamas is recognized by the U.S. and the European Union as a terrorist organization, and that it has antisemitic genocide written into its charter—which is why Hamas welcomed this report. No legitimate human rights organization would omit these facts, either.

"As used in the report, even the dozens of references to the 'Palestinian people' are antisemitic: they intermix all the diverse backgrounds of those whose families ever resided in British Mandatory Palestine, except Jews. Such a concocted notion of 'peoplehood,' one defined only by the ethnicity it excludes, demonstrates obvious bigotry.

"This report provides further proof that Amnesty International is not a human rights organization at all, but an antisemitic hate group, and anyone reading this report will be subjected to a litany of shameless lies."

The left-wing Council on American-Islamic Relations (CAIR), which is often sharply critical of Israel, said of the Amnesty International report, “We welcome this exhaustive, landmark report as further recognition of what has been blazingly obvious: the Israeli government has been engaged in the systematic imposition of apartheid on the Palestinian people. Now is the time for the international community to move beyond words and towards action in defense of the Palestinian people and their human rights.”