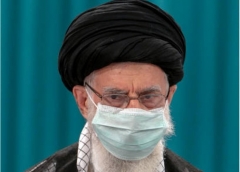 (CNSNew.com) - Ayatollah Sayyid Ali Khamenei, the Supreme Leader of Iran, sent out a pair of tweets on March 1 charging the United States with being a “mafia regime” that “creates crises.”

“The U.S. is a manifestation of modern ignorance, discrimination, oppression &  creating crises in the world today,” said the Ayatollah’s first tweet.

“Basically,” he said, “the U.S. regime creates crises, lives of crises & feeds on various crises in the world.

“#Ukraine is another victim of this policy,” he said.

“The U.S. regime is a mafia regime,” the Ayatollah said in his next tweet. “Political, economic, & all sorts of mafias control their country and bring presidents to power. They create crises in the world to maximize their profits.”