Pope Meets With Pelosi Two Days After She Vows ‘to Enshrine Roe v. Wade Into the Law of the Land’ 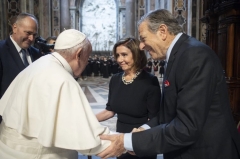 (CNSNews.com) - Pope Francis met today at the Vatican with Speaker Nancy Pelosi (D.-Calif.) and her husband Paul Pelosi, just two days after the speaker had publicly declared her commitment to pushing Congress to enact legislation “to enshrine Roe v. Wade into the law of the land.”

The Supreme Court last Friday released its opinion in Dobbs vs. Jackson Women’s Health, which declared that there is no federal constitutional right to abortion and that it is, therefore, up to the states to determine their own abortion laws.

On Monday, Pelosi released a “dear colleague” letter she had sent to other Democrats in the House of Representatives that day. The letter expressed her views on how the House should respond to the Dobbs decision.

“Our Caucus has been exploring avenues to protect the health and freedom of American women,” said Pelosi.

“Among them,” she said, “is legislation that: …Once again passes the Women’s Health Protection Act: landmark legislation to enshrine Roe v. Wade into the law of the land.”

On Wednesday, the Associated Press reported that Pelosi had attended Mass that day at the Vatican—after meeting with the pope.

“U.S. House Speaker Nancy Pelosi met with Pope Francis on Wednesday and received Communion during a papal Mass in St. Peter’s Basilica, witnesses said, despite her position in support of abortion rights,” said the AP.

“She was seated in a VIP diplomatic section and received Communion along with the rest of the congregants, according to two people who witnessed the moment,” said AP.

“Pelosi met with Francis on Wednesday before the Mass and received a blessing, according to one of the Mass attendees,” said the AP. “A photo released by the Vatican showed Pelosi and her husband, Paul Pelosi, greeting Francis off to the side of the basilica.”