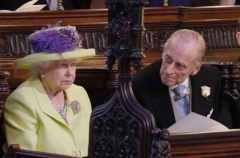 Queen Elizabeth II and Prince Philip at the wedding of Prince Harry and Meghan Markle, at St. George's Chapel, Windsor Castle, May 19, 2018. (Photo by Jonathan Brady/Pool/AFP via Getty Images)

(CNSNews.com) - “It is with deep sorrow that Her Majesty The Queen announces the death of her beloved husband,” Buckingham Palace said in a statement released this morning.

“The Royal Family join with people around the world in mourning his loss,” said the statement.

Philip Mountbatten had married Princess Elizabeth on Nov. 20, 1947 at Westminster Abbey in London. At the time, Elizabeth’s father King George VI was on the throne. On that day, Philip was made the Duke of Edinburgh.

Philip had been born in Greece of both Greek and Danish royal ancestors. He joined the British Royal Navy in 1939 and served in that navy through World War II.

The wedding of Prince Harry and Meghan Markle at St. George's Chapel in Windsor Castle, May 19, 2018. (Photo by Jonathan Brady/AFP via Getty Images)