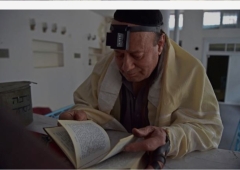 Zebulon Simentov, an Afghan Jew, looks at the Torah in a synagogue in Kabul on April 5, 2021.. (Photo by Wakil Kohsar/AFP via Getty Images)

(CNSNews.com) - The U.S. Commission on International Religious Freedom released its 2022 annual report today in which it said that “the last known remaining Jew left Afghanistan in September 2021 out of fear of persecution by the Taliban.”

“Historically, the nation was religiously diverse, but the vast majority of non-Muslims fled after the Taliban consolidated control of the government in 1996,” it says. “The country’s current population is approximately 99.7 percent Muslim (84.7–89.7 percent Sunni and 10–15 percent Shi’a, including Ismailis and Ahmadis), with the few remaining non-Muslims (Hindus, Sikhs, Baha’is, Christians, Buddhists, Zoroastrians, and others) comprising the remaining 0.3 percent.

“By the end of 2021, there appears to be no remaining Jews in Afghanistan,” says the report.

“There are an estimated 12,000 Christian converts throughout the country,” the report says.

“Afghanistan’s overall instability has led to the near extinction of religious minorities, particularly the Jewish, Hindu, and Sikh communities,” it says.

“While the last known remaining Jew left Afghanistan in September 2021 out of fear of persecution by the Taliban, the Hindu and Sikh community population dwindled to 140 at the end of 2021, a near extinction of the once robust community,” it says.

“Christians, Ahmadiyya Muslims, Baha’is, and nonbelievers are unable to express their faiths or beliefs openly because they face dire consequences, including death, if discovered by the Taliban or ISIS-K,” it says.