After Lull, Russia Launches Renewed Offensive in a Bid to Capture the Rest of Donbass 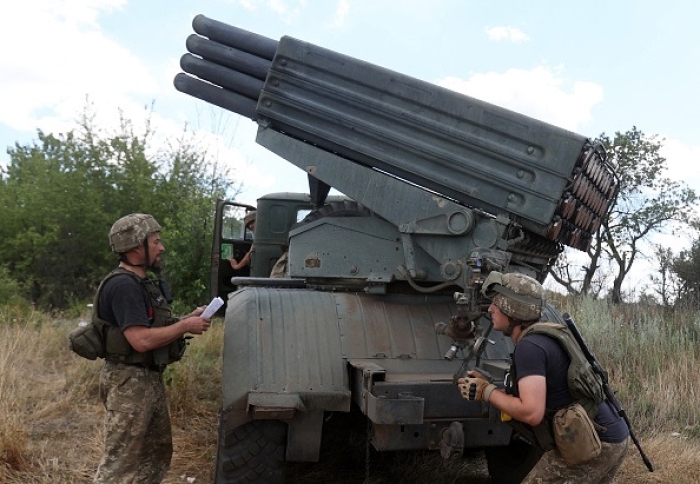 Ukrainian servicemen prepare to fire a Grad BM-21 multiple rocket launcher at the front line between Russian and Ukraine forces in Donbass. (Photo by Anatolii Stepanov / AFP via Getty Images)

Moscow (CNSNews.com) – Russian forces have launched a renewed offensive in the Donbass region of eastern Ukraine after nearly a month of no major ground operations.

Over the past week, Russian troops have begun pushing into the frontline towns of Avdiivka, Pisky, and Maryinka – some of Ukraine’s most heavily fortified positions in the entire Donbass. Capturing the towns has long been a high priority for the Kremlin due to their close proximity to the pro-Russian rebel capital of Donetsk.

Russian forces have also begun an assault on the towns of Soledar and Bakhmut, which are located on a highway that has served as an important supply route for Ukrainian forces. Seizing control of the road would also enable Russia to make a push towards Slovyansk and Kramatorsk, Ukraine’s last remaining major strongholds in the Donbass.

During a video address last week, Ukrainian President Volodymyr Zelensky described the fighting in the Donbass as “hell” and admitted that Ukrainian forces were not yet able to completely overcome Russia’s advantage in artillery and manpower.

In a Facebook post widely shared on social media, Serhiy Gnezdilov, a Ukrainian soldier fighting in Pisky, described the battle for the village as a “senseless meat grinder” in which Ukrainian forces were suffering heavy casualties to Russian artillery fire. He reported that Russian forces had fired 6,500 shells on Pisky in just a single day, adding that Ukrainian troops had little means of responding due to a lack of counter-battery capability.

“All reserves are destroyed, military equipment is on fire, the enemy approaches and without any problems occupies our positions after another barrage of artillery,” he wrote. “Right now we are losing Pisky, all our human and material resources are almost exhausted.”

Over the past four months, Russia and Ukraine have been locked in a grueling fight for control of the Donbass. Military observers have noted that Russia is pursuing a war of attrition strategy that is reminiscent of the Western front in World War 1. Instead of attempting large-scale offensives from multiple directions, Russian forces have focused on making incremental gains along the frontline, preceded by massive artillery fire against Ukrainian positions.

Early last month, Russian forces succeeded in establishing full control of the Luhansk region, one of the two provinces in the Donbass. Since then, fighting on the ground has been fairly limited as both sides have moved to regroup. Yet the Russian military has made no secret of the fact that its next offensive would be in Donetsk, nearly half of which is still controlled by Ukrainian forces.

The Donbass has been at the center of tensions between Moscow and Kyiv since 2014, when pro-Russian rebels in Luhansk and Donetsk declared their independence from Ukraine following a referendum that was not officially recognized by any government. Although the Ukrainian government and rebels agreed to a peace deal in 2015, both sides repeatedly accused one another of violating it.

This fragile ceasefire finally broke down in late February, when the Kremlin sent troops into Ukraine. In addition to framing his decision as a preventive strike aimed at keeping Ukraine out of NATO, President Vladimir Putin argued that a military response was necessary to protect the Russian-speaking population of the Donbass.

Foreign Minister Sergei Lavrov told reporters last month that Moscow’s objectives in Ukraine had expanded beyond the Donbass to also include the southern Kherson and Zaporizhia provinces, which were captured by Russian forces during the early phase of the conflict.

That statement echoed earlier comments by a senior Russian commander, who said Russia intended to take over Ukraine’s entire Black Sea coastline to establish a land bridge to Transnistria, a pro-Russian breakaway province in Moldavia.

For their part, Ukrainian officials have ruled out making any territorial concessions in exchange for a peace deal, instead vowing to soon launch a counteroffensive to dislodge Russian troops from Kherson.

In recent weeks, the Ukrainian military has stepped up its artillery and rocket fire against infrastructure targets in the province. Many of these strikes were conducted with weaponry provided by the U.S. and other Western partners, such as High Mobility Artillery Rocket Systems (HIMARS).