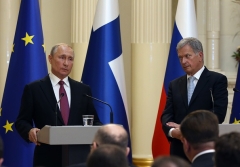 Moscow (CNSNews.com) – Finland has announced its formal decision to apply to join NATO, one day after Russian President Vladimir Putin warned that doing so would be a “mistake.” Some Russian lawmakers went further, predicting that the move could lead to war between the neighbors.

Putin in a phone call with Finnish President Sauli Niinisto “stressed that rejecting the traditional policy of military neutrality would be wrong since there are no threats to Finland’s security,” the Kremlin said in a readout.

“Such a change in the country’s foreign policy course could have a negative effect on Russia-Finland relations, which have been built over the course of many years in the spirit of neighborliness and partnership cooperation and have a mutually beneficial nature,” it added.

The warning came after Niinisto and Prime Minister Sanna Marin declared last Thursday that Finland “must apply for NATO membership without delay” to ensure its own security.

On Sunday, Helsinki formally announced it was moving ahead with the move, and would submit the proposal to parliament for ratification.

Finland’s membership in NATO could potentially have significant implications for Russia, more than doubling the current length of borders between Russia and alliance members (from 754 miles to 1,586 miles.)  St. Petersburg, Russia’s former capital and second largest city, is just 120 miles from the Finnish border.

On Friday, the Russian foreign ministry said that if Finland joins the alliance, Moscow “will be forced to take retaliatory steps, both of a military-technical and other nature.”

“Since NATO is waging an undeclared war against Russia, the entry of any state into NATO under these conditions is in fact an informal declaration of war on the Russian Federation,” he told a Moscow radio station.

“Therefore, Finland’s entry into NATO means that it is not only joining an inherently aggressive, anti-Russian military bloc, but that it is also actually declaring war.”

Alexey Zhuravlev, deputy chairman of the State Duma’s defense committee and a known foreign policy hawk, told the URA.RU news website that Finland’s pursuit of NATO membership should cause Russia “to question the existence of this state.”

Zhuravlev warned that if the U.S. threatened Russia and believed that it should not exist, it could be targeted with a Sarmat intercontinental ballistic missile “and be turned into nuclear ashes.” By associating itself with the U.S., he suggested, Finland was placing itself in that same position.

Despite the fiery rhetoric by some lawmakers, defense analysts here argue that the Kremlin’s next steps will largely depend on what Finland’s integration into NATO looks like in practice.

Ivan Konovalov, director of the 21st Century Technology Development Fund, told the Vedomosti newspaper that so long as Finland did not agree to host “large U.S. military installations,” Russia’s counter-measures would be limited in scope.

He added that even before formally applying for NATO membership, Finland had maintained close ties with the alliance, with joint intelligence activities and military exercises.

“Russia will be forced to do what it has never applied to Finland – to aim its operational-tactical missiles at its cities, primarily the Iskander-M system,” he told the Evening Moscow newspaper.

Marin said on Saturday that “there is no information indicating Russia will initiate military action against Finland” over its NATO decision, but added that her country was “prepared for different types of action” from the Kremlin.

Finland adhered to a policy of military non-alignment through the Cold War, seeking to maintain good ties with both Moscow and the West. That status saw it hosting a series of high-profile meetings between U.S. and Russian leaders, most recently the 2018 summit between Putin and President Trump.

Although that policy enjoyed widespread backing in Finland, Putin’s decision to send forces into Ukraine caused a significant jump in public support for NATO membership. A recent poll by public broadcaster YLE found that 76 percent of Finns were in favor of joining NATO, up from 23 percent in February.