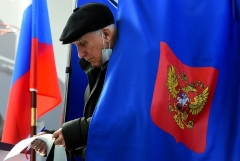 A Russian voter in Saint Petersburg on Sunday. (Photo by Olga Maltseva/AFP via Getty Images)

Moscow (CNSNews.com) – Russian opposition activists are furious that Google and Apple evidently succumbed to pressure from the Kremlin and removed from their online stores an app that offers recommendations on which candidates to vote for in the weekend’s nationwide parliamentary elections.

The Smart Voting app was developed in 2018 by the allies of jailed opposition politician Alexei Navalny, in an initiative that encourages opposition voters to support the most electable anti-Kremlin candidates in federal and local elections, regardless of whether they share their political views or not.

The strategy was credited for playing a key role in helping opposition parties to make significant gains in the 2019 Moscow city council elections.

On the eve of the Sept. 17-19 parliamentary election, Google and Apple on Friday sent emails to members of Navalny’s activist network informing them that they would disable access to the app in Russia, citing the government’s designation of the network as an “extremist organization.”

The following day, Google ordered Navalny’s network to delete two documents on Google Docs which contained a list of endorsed opposition candidates. It also blocked Russian users from viewing a YouTube video on Navalny’s channel which featured the list.

Leonid Volkov, Navalny’s chief of staff, accused the two Silicon Valley giants of bowing to “cheap blackmail” from the Kremlin.

“I’m terribly angry with Google and Apple, not because they caved in, but because they are fools,” he wrote in the Telegram messaging app.

Press queries have been sent to Apple and Google.

Kremlin spokesperson Dmitry Peskov told reporters on Friday that the presidential administration “of course” welcomed the removal of the app from the Google and Apple stores.

“This application is illegal on the territory of our country,” he said. “Both platforms received a notification and, in accordance with the letter and spirit of the law, they made such a decision.”

Over the past eight months, the Kremlin has cracked down on Navalny and his supporters. Russian border patrol arrested Navalny in January when he tried to return to the country from Germany, where he had spent five months recovering from a suspected poisoning attack that he blames on the Kremlin.

The following month, a Moscow court sentenced Navalny to 2.5 years in prison for allegedly violating his probation terms from a prior 2014 suspended sentence.

In June, another Moscow court designated Navalny’s activist network as an “extremist organization,” making it illegal for the group’s members and supporters to run for public office. Shortly thereafter, Russia’s state Internet watchdog, Roskomnadzor, blocked 49 websites linked to Navalny, including his personal website.

In recent weeks, Roskomnadzor has repeatedly threatened to impose hefty fines against Google and Apple unless they remove the Smart Voting app from their stores. The agency has accused the tech companies of helping to “promote and implement the activities of extremist organizations” and “interfering” in Russia’s parliamentary elections.

On Thursday, Google and Apple representatives met with the Russian senate’s commission on election interference. Andrei Klimov, the commission’s head, revealed later that the senators had threatened to hold their Russian employees criminally liable if the two companies continued defying Roskomnadzor’s directives.

“If you wish, there are ways to find all the culprits,” Klimov told Russian news website RBC. “These are things related to national security – We’re not joking around.”

Early returns on Sunday evening appeared to show the pro-Kremlin United Russia in first place with 39.2 percent of the vote, followed by the Communist Party with 24.7 percent and the ultra-nationalist Liberal Democratic party with 9.5 percent, according to Russia’s electoral commission. Minor parties divided up the rest of the vote.

The figure represents a major drop in support for United Russia, which captured 54.2 percent in the 2016 elections. Navalny’s Smart Voting initiative had overwhelmingly endorsed candidates from the Communist Party – in a tactical move rather than an expression of ideological support – which if preliminary results hold up, will see its electoral support grow by 11.4 percent compared to 2016.

The independent poll monitor Golos said that it registered more than 4,800 instances of potential electoral fraud over three days of voting.