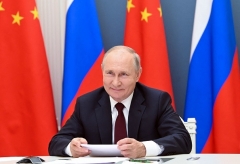 Putin foreign policy advisor Yuri Ushakov told reporters following a video call between the two leaders that the Russian leader had briefed Xi on his recent conversation with President Biden.

Putin had also shared Russia’s concerns about the possibility of NATO admitting Ukraine as a member or deploying its military infrastructure to the country, he added.

“What is very important is that the president of the People’s Republic of China stressed that he understands Russian concerns and fully supports our initiative to develop appropriate security guarantees for Russia, and the parties agreed to maintain contacts on this issue,” Ushakov said.

“We will inform our Chinese colleagues about how we will develop negotiations and contacts on this score with American and NATO partners.”

Ushakov also stated Putin and Xi had both voiced “concerns” over U.S. efforts to “create new alliances” in Asia such as the Quad (the U.S., India, Australia, and Japan) and the AUKUS (the U.S., Australia, and Britain) nuclear-powered submarine partnership.

They also denounced Biden’s recent Summit for Democracy as “confrontational” and “counterproductive,” he said.

Beijing’s official readout of the Putin-Xi call did not mention Ukraine or NATO expansion, but did state that Putin “firmly supported China in upholding core interests, and rejected attempts to sow discord between Russia and China.”

Nevertheless, the reported discussion on NATO enlargement featured prominently in Russian media coverage of the call.

Yuri Tavrovsky, one of Russia’s most influential experts on China, told Gazeta.ru that Putin’s decision to brief Xi on his call with Biden represented a major step forward for the two countries.

“Putin informed Xi as an ally,” he said. “This is a new step in the development of allied relations.”

Putin during Wednesday’s video call with Xi. (Photo: The Kremlin)

The call comes at a time of heightened tensions between the U.S. and Russia over the buildup of Russian troops near Ukraine’s borders.

The Kremlin has denied plans to invade, and is demanding written legal guarantees that NATO will not expand further eastward or deploy weapons systems near Russia’s borders.

After their two-hour video call last Tuesday, Biden told reporters that the U.S. would meet with its NATO allies “to discuss the future of Russia’s concerns relative to NATO writ large” and to see “whether or not we can work out any accommodations as it relates to bringing down the temperature along the eastern front.”

As relations with the U.S. have become more strained, Moscow has responded by drawing closer with China. Over the past two months, they conducted their first-ever joint naval exercise in the West Pacific and flew a joint air patrol over the Sea of Japan and East China Sea.

At the end of last month, the two signed a four-year military cooperation roadmap that called for expanded joint exercises on land, sea, and air.

Russia joined China in lobbying against the AUKUS partnership, and against the Summit for Democracies.

Putin has previously confirmed plans to visit China in February for the Beijing Winter Olympics – in sharp contrast to the decision by the U.S. and others including Britain, Australia, and Canada, not to send any government representatives due to concerns about China’s human rights record.

The Kremlin has criticized the diplomatic boycott, arguing that the Olympics should be “free of politics.”