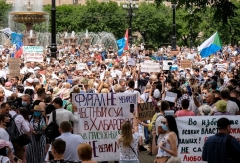 Thousands of Russians protest in support of the arrested regional governor in the far eastern city of Khabarovsk. (Photo by Aleksandr Yanyshev/AFP via Getty Images)

Moscow (CNSNews.com) – The Kremlin has permitted mass unsanctioned protests in Russia’s Far East to continue unhindered for over a month, a sharp contrast with its usual policy.

Since early July, thousands of demonstrators have gathered daily in the city of Khabarovsk to protest the arrest of Sergei Furgal, the region’s popular opposition governor. Authorities have charged Furgal with orchestrating multiple killings 15 years ago, but his supporters insist that the accusations are politically motivated.

The largest rallies attracted up to 50,000-60,000 people, according to local media and rights groups. At many of these protests, demonstrators chanted slogans targeting President Vladimir Putin, such as “Putin, step down!” and “Putin is a thief!”

A recent survey of Russians by independent pollster Levada Center found that 83 percent of respondents had heard about the protests. Of those, 45 percent sympathized with the demonstrations and only 17 percent viewed them unfavorably. On August 1, solidarity rallies for Khabarovsk took place in several major cities such as Moscow, St. Petersburg, Kazan, and Irkutsk.

In a stark departure from the norm, however, authorities have appeared reluctant to crack down on the protests. Unsanctioned rallies in Russia are usually dispersed by the police, but that has not been the case in Khabarovsk. Local police have instead limited themselves to observing the demonstrations from a distance and handing out face masks to protestors.

Unlike earlier protests elsewhere in Russia, there have also been relatively few arrests in Khabarovsk. During last Saturday’s demonstration, six protestors out of an estimated crowd of 10,000 were detained.

By contrast, police arrested more than 1,000 demonstrators after a rally in Moscow last summer during a wave of protests over ballot access at the city council elections. Several of those arrested were subsequently sentenced to up to three years in prison.

He noted that Khabarovsk was a relatively small city of only 600,000 people, and that the police almost certainly had relatives and friends among those protesting.

“I think that Moscow fully understands this fact, and does not want to conduct an experiment where it gives an order to local law enforcement and then observes whether they faithfully implement it,” Lukin said.

At the same time, the Kremlin seems to have calculated that the best strategy is to simply wait for the protests to die down on their own, Lukin argued. Better to let the protests gradually lose steam, he explained, than to escalate and risk a massive backlash.

“Using force can provoke a totally unpredictable reaction from the people,” Lukin said. “It has an equal likelihood of scaring people back into their homes or sparking even more intense protests. I don’t think the Kremlin wants to run that experiment in Khabarovsk.”