‘No Limits’ Friendship: Putin and Xi Present Common Front Against the US 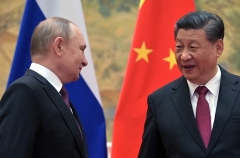 Following a three-hour long meeting, the two leaders published a lengthy joint statement, pledging to stand together to oppose NATO expansion, the AUKUS nuclear submarine partnership, potential U.S. deployment of intermediate range missiles in either Europe or Asia, and “interference by outside forces in the internal affairs of sovereign countries under any pretext.”

Russia also reaffirmed “its support for the one China principle, confirms that Taiwan is an inalienable part of China, and opposes any forms of independence of Taiwan.”

Taiwan’s foreign ministry called the declaration an “insult to the peaceful spirit embodied by the Olympic rings.”

The Putin-Xi statement also declared that cooperation between the two countries had surpassed the level of traditional alliances. “Friendship between the two states has no limits, there are no forbidden areas for cooperation,” it said.

Vasily Kashin, a professor at the Moscow-based National Research University Higher School of Economics, said the statement showed that Russia and China were becoming increasingly aligned on sensitive geopolitical issues.

“If earlier China could remain aloof from some European subjects, and Russia from some Asian ones, now they will begin to get closer and talk about joint actions,” he told the Gazeta.ru news website.

Lü Xiang, a research fellow at the Chinese Academy of Social Sciences, told the CCP paper Global Times that it marked the first time that the two governments have expressed a common position in writing on all “the major issues and strategic questions.”

Lü predicted that the “unprecedented” bilateral cooperation would have broader geopolitical significance since they are the only countries powerful enough to oppose Washington.

“The solidarity between China and Russia gives a new definition to the world order, as they share common knowledge about where the major threats to global stability come from.”

Putin and Xi also signed 16 agreements in areas ranging from space cooperation to cultural exchange. The deals included a 25-year contract for Russian gas conglomerate Gazprom to supply China with an additional 10 billion cubic meters of gas annually through a new route in the Russian Far East, and a 10-year agreement for Russian oil giant Rosneft to deliver 100 millions tons of oil annually to China through Kazakhstan.

The two countries are also currently in an advanced stage of negotiations for the Power of Siberia-2 pipeline, which would deliver up to 50 bcm of Russian gas to China per year through Mongolia.

Putin’s visit to China comes at a sensitive time for Russia. Over the past several months, the U.S. and its allies have accused Moscow of preparing to invade neighboring Ukraine, pointing to a Russian military buildup of more than 100,000 troops near the Ukrainian border.

Last week, the Biden administration claimed that Russia was plotting a false flag attack against pro-Russian rebels in eastern Ukraine so that it could have a pretext for declaring war. So far, however, the administration has made no evidence public.

Although Russia has repeatedly insisted that it has no intention of invading Ukraine, it has also warned of a “military-technical” response if the West does not provide it with legally binding security guarantees against further NATO expansion or deployment of the alliance’s military infrastructure near Russia’s borders.

A series of US-Russian security talks last month failed to result in a diplomatic breakthrough.

In the meanwhile, however, Moscow has sought to close flanks with Beijing. Russia’s Ambassador to China Andrey Denisov told the South China Morning Post last month that Russia was constantly updating China on how its security talks with the U.S. were progressing.

For its part, Washington has urged Beijing to use its influence with Moscow to help defuse tensions in Europe. On Friday, Daniel Kritenbrink, assistant secretary of State in the Bureau of East Asian and Pacific Affairs, told reporters the U.S. wanted China to “encourage Russia to pursue diplomacy and de-escalation in Ukraine.”

“That is what the world expects from responsible powers,” he said. “If Russia further invades Ukraine and China looks the other way, it suggests that China is willing to tolerate, or tacitly support Russia's efforts to coerce Ukraine, even when they embarrass Beijing, harm European security, and risk global peace and economic stability.”