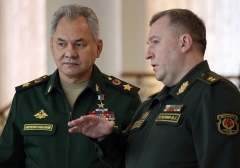 The Russian and Belarusian defense ministers, Sergei Shoigu and Sergei Shoigu, confer in Minsk ahead of the start of the joint military exercises. (Photo by Maxim Guchek /Belta/ AFP via Getty Images)

Moscow (CNSNews.com) – Russia and Belarus on Thursday kicked off their closely-watched large-scale military exercise  near Belarus’ border with Ukraine, sparking protests from the U.S. and some NATO allies.

Intended to run through February 20, the Union Resolve 2022 drills will involve thousands of troops and a large quantity of heavy equipment. They are taking place at five training grounds in the west and southwest, near Belarus’ border with Ukraine and in close proximity to its borders with NATO members Poland and Lithuania.

“The drills are being conducted to practice the tasks of countering and repelling external aggression in the course of a defensive operation, fighting terrorism and protecting the interests of the [Russia-Belarusian] Union State,” Russia’s defense ministry said in a statement.

Belarusian President Alexander Lukashenko has been more explicit, telling his cabinet last month the wargames should practice “a certain plan for confronting forces in the West – the Baltic States and Poland – and in the south – Ukraine.”

White House press secretary Jen Psaki told reporters on Wednesday the administration views the Russia-Belarus exercise “as certainly more of an escalatory and not a de-escalatory action.”

“So, that is certainly concerning to us, but I wouldn’t make a prediction of what it means in terms of invasion,” she added.

U.S. officials warned earlier that the joint exercise could serve as either a precursor to a Russian military strike against Ukraine from the north, or mark the beginning of a permanent military presence in Belarus that could potentially include nuclear weapons deployment.

The exact number of troops participating has not been announced, although both countries’ defense ministries have said the drill will not exceed the limits set by the Organization for Security and Cooperation in Europe (OSCE) in 2011. They require OSCE member states to give 42 days’ notice for any exercise involving more than 9,000 troops, and to invite observers from other member states for any exercise featuring more than 13,000 personnel.

NATO claims that the exercise’s actual scale is much larger than portrayed, accusing Russia of sending more than 30,000 troops to Belarus. If true, that would make it Moscow’s largest deployment to the country since the end of the Cold War.

Lithuania, Latvia, and Estonia on Wednesday jointly filed a formal transparency request with the OSCE, calling upon Belarus to provide a “detailed explanation” of the number of troops and heavy equipment involved in the exercise.

Lithuanian Prime Minister Ingrida Simonyte told the Guardian that the security landscape in Eastern Europe would permanently change if Russia established a long-term presence in Belarus.

Moscow and Minsk have both stated that Russian troops would leave Belarus after the conclusion of Union Resolve 2022.

But Dmitry Stefanovich, an analyst at the Moscow-based Institute of World Economy and International Relations, told Vedomosti that it was possible Russia could leave some military equipment and weaponry in Belarus after the exercises end, “either sold to the ally or provided on a conditional lease.”

The exercise comes amid a high stakes standoff between Russia and the West over Ukraine. Moscow has reportedly deployed more than 100,000 troops and heavy equipment near Ukraine’s eastern borders and this week plans to start live-fire naval exercises in the Black Sea, after six of its large landing ships entered the region waterway from the Mediterranean.

The Kremlin has repeatedly said it has no plans to invade Ukraine. Russian President Vladimir Putin has, however, said that admitting the country into NATO would cross a “red-line.” He also warned of a “military-technical” response if the West does not provide Moscow with legally binding security guarantees that NATO will halt its enlargement and withdraw its military infrastructure back to positions held in 1997.

Lukashenko in an interview with Russian state television that aired on Monday pledged to join Russia in taking military action against Ukraine if Kyiv crossed Moscow and Minsk’s “red-lines.”

Meanwhile, Ukraine launched its own ten-day military exercise on Thursday near its northern border. The drills will feature weapons systems acquired from NATO members in recent years – most notably the American Javelin and British NLAW anti-tank missile, and Turkish Bayraktar TB2 combat drones.

At the same time, Ukrainian Defense Minister Oleksiy Reznikov downplayed fears of an invasion from the north. He told reporters on Wednesday that in order to reach Kyiv the Russian and Belarusian forces would have to overcome not only harsh terrain, but also residual radiation from the 1986 nuclear accident at Chernobyl, which lies north of Ukraine’s capital, near the border with Belarus.

“This area is very hard to get through – forests, swamp, rivers – it’s complicated enough to move by foot let alone with a tank,” Reznikov said. “And don’t forget that still since the disaster there remain some highly radioactive areas on the route from Belarus.”