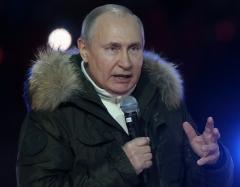 Moscow (CNSNews.com) – President’s Biden depiction of Russian President Vladimir Putin as a “killer” has sparked a serious diplomatic row, with Moscow recalling its ambassador for the first time in over two decades and Putin retorting on Thursday, “it takes one to know one.”

During an interview that aired on Wednesday, ABC News’ George Stephanopoulos asked Biden about a recently published declassified report from the Office of the Director of National Intelligence, which concluded that Putin had authorized “influence operations” aimed at undermining Biden’s candidacy and undermining public trust in the electoral process during the 2020 campaign.

“He will pay a price,” Biden replied. “You’ll see shortly.”

Stephanopoulos asked Biden whether he thought Putin was a “killer” – in light of recent accusations that the Kremlin attempted to poison opposition figure Alexei Navalny. “I do,” Biden replied.

The remarks provoked an angry response from Russian officials and lawmakers. Kremlin spokesperson Dmitry Peskov told reporters it was “clear” that Biden had no desire to see the relationship between the U.S. and Russia improve, and that “we will proceed from that.”

Putin fired back during a discussion Thursday with representatives from Crimea. Asked about Biden’s “killer” comment, he replied, “it takes one to know one.”

Shortly after the ABC News interview aired, Russia announced that it had summoned its ambassador for consultations on how to address its “deteriorating” relationship with Washington. The last time Russia took such action was in 1998, after the Clinton administration launched a four-day bombing campaign of Iraq that Moscow strongly opposed.

The Russian Embassy said in a press release on Thursday that “certain ill-considered statements of high-ranking U.S. officials have put the already excessively confrontational relations under the threat of collapse.”

Some Russia lawmakers signaled that recalling the ambassador is potentially only a first step.

Senator Konstantin Kosachev, deputy speaker of the Federation Council, said it was a “watershed moment” in U.S.-Russian relations.

“The withdrawal of the Russian ambassador from Washington to Moscow for consultations is a prompt, adequate and only correct response to such a situation,” he wrote in a Facebook post. “I suspect it won’t be the last unless there’s an American explanation and apology.”

On a similar note, Senator Alexei Pushkov told Vzglyad newspaper that “Russia should no longer show an automatic readiness to interact on topics that are important for America, and without our country, a number of major issues cannot be resolved.”

The U.S. and Russia have joint projects in space and exchange information relevant to counter-terrorism.

Biden has a long and difficult history with Russia. As vice president he helped to promote the Obama administration’s “reset” in 2009, but his relationship with the country’s leadership became more contentious over the ensuing years.

During a 2011 trip to Moscow, Biden reportedly told Putin he had no soul. Following the outbreak of the Ukraine crisis in 2014, Biden became the administration’s pointman in the country, and pushed the European Union to impose sanctions against Russia.

Campaigning for the White House, Biden called Russia "the biggest threat to America right now" and referred to Putin as a “KGB thug.”

Since taking office in January, the administration has joined the E.U. in imposing sanctions against Russian officials and entities in response to the treatment of Navalny. At the same time, it extended the New START Treaty, an Obama-era arms control agreement that imposed limits on the number of strategic nuclear weapons the two nations are allowed to possess.