Putin Warns of a Military Response to NATO’s ‘Aggressive’ Policies 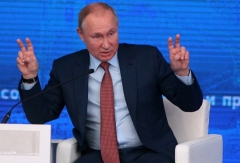 Moscow (CNSNews.com) – President Vladimir Putin on Tuesday issued a fresh warning that Russia will respond militarily if the West refuses to heed its concerns about NATO expansion and military support for Ukraine.

During a speech to the Russian Defense Ministry’s board, Putin reiterated his longstanding concern about “the growth of the US and NATO military forces in direct proximity to the Russian border and major military drills.” If Western missile systems are deployed in Ukraine, he said, their flight time to Moscow would be reduced to between seven and ten minutes.

“Naturally, as I have already noted, if our Western colleagues continue their obviously aggressive line, we will take appropriate military-technical reciprocal measures and will have a tough response to their unfriendly steps,” he told an audience of Russian top military brass.

More junior officials in the Russian government, such as Deputy Foreign Minister Sergey Ryabkov, have made similar statements in recent days, but this is the first time in the current tensions that Putin has done so publicly.

Later in the speech, Putin expressed the view that that if the U.S. were to deploy weapons in Ukraine, it could follow up by “arming and pushing extremists from the neighboring state against Russia.”

“What they are doing now on the territory of Ukraine, or trying to do, or planning to do – this is not a thousand kilometers from our national border, it is at the doorstep of our home,” he said. “They must understand that we simply have nowhere further to retreat.”

Addressing the same meeting, Defense Minister Sergei Shoigu claimed that Moscow had obtained intelligence that more than 120 U.S. private military contractors had been deployed near the conflict zone in eastern Ukraine. According to Shoigu, the mercenaries were preparing to “commit provocations” in the region using unknown chemical substances.

He did not provide any further evidence or details to back up his allegations.

Putin’s and Shoigu’s comments come amid rising tensions between the U.S. and Russia over Ukraine. The Biden administration has accused Russia of deploying nearly 100,000 troops near the Ukrainian border in preparation for a possible invasion.

The Kremlin denies the allegations, in turn accusing the West of threatening its security through two decades of NATO expansion to the east.

Last Friday, the Russian foreign ministry released two draft agreements outlining what legally binding security guarantees Moscow wants from the U.S. and NATO. They called on NATO to abandon plans for further enlargement; to refrain from “any military activity” on the territory of Ukraine and other Eastern European states, the South Caucasus, and Central Asia; and for the U.S. to not establish any new military bases in former Soviet states.

On Tuesday, Assistant Secretary of State Karen Donfried told reporters the U.S. was looking to hold talks with Russia about its security concerns sometime next month. She added that although the administration views some of Russia’s proposals as “unacceptable,” it believed that “there’s merit in having a discussion.”

Some influential Russian analysts argue, however, that negotiations are unlikely to result in a major agreement – and that the Kremlin knows it.

Fyodor Lukyanov, chairman of the Council of Foreign and Defense Policy, a research group that advises the Kremlin, contended that Moscow likely realizes that its list of “revolutionary” security demands goes well beyond what the U.S. and European allies would find acceptable.

The Kremlin’s real motive behind putting out the draft proposal, he suggested, was to elicit a rejection from the West, which would “untie [Russia’s] hand for actions aimed at revising the existing system of relations.”

“The scale of the proposals put forward does not allow for the possibility of [Russia] simply accepting a refusal from the West and postponing the issue until the next diplomatic round,” he wrote in the Telegram messaging app.

“Such a scenario would undermine the credibility of any demands,” Lukyanov said. “So, the most important question now is what kind of action the [Kremlin] plans on taking in the event of a negative response.”