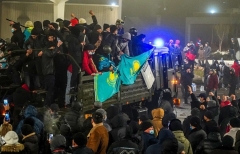 Protesters in Almaty, Kazakhstan on Wednesday. (Photo by Abduaziz Madyarov/AFP via Getty Images)

(CNSNews.com) – Russia and its allies in the Collective Security Treaty Organization (CSTO), an alliance comprising several former Soviet republics, have deployed thousands of troops to Kazakhstan in response to violent anti-government protests which its president and Moscow claim are being inspired from abroad.

It’s the first time in the bloc’s 30-year history that the mutual defense provisions in its founding charter have been invoked.

The Russian defense ministry published several videos on social media on Thursday morning showing Russian paratroopers and armored vehicles boarding planes at an airbase near Moscow. A subsequent update by the ministry said the first Russian units arrived in Kazakhstan later that evening.

CSTO members Armenia, Belarus, Kyrgyzstan, and Tajikistan have also sent military contingents to Kazakhstan as part of a “peacekeeping mission.”  CSTO put the total number of troops at 2,500.

The CSTO’s Moscow-based secretariat said in a statement the troops’ main tasks would be to guard “important state and military facilities” and provide “assistance to the forces of law and order” in Kazakhstan.

It emphasized that the deployment was for “a limited time period in order to stabilize and normalize the situation in the country.” A spokesperson later clarified that the expected timeline was several days or weeks.

Kazakhstan President Kassym-Jomart Tokayev on Wednesday night requested military assistance from the alliance to help quell a wave of anti-government riots. He claimed the protests were being spearheaded by “terrorist gangs” which had received training from abroad.

“Their attack on Kazakhstan can and should be viewed as an act of [external] aggression,” he said.

Established in 1992, the CSTO was founded to serve as a Eurasian counterpart to NATO. Article 4 of the bloc’s charter states that “in case an act of aggression is committed against any of the Member States all the other Member States will provide it with the necessary assistance, including military.”

Several hours after Tokayev’s speech, the CSTO announced it would send a joint peacekeeping mission to Kazakhstan, citing its Article 4 obligations.

Russia’s foreign ministry on Thursday denounced the protests, calling them “an attempt, inspired from the outside, to undermine the security and integrity of the state by force, using trained and organized armed formations.”

Although the ministry did not elaborate, Russian lawmakers have accused U.S.-backed nongovernmental organizations in Kazakhstan of aiding the protests.

“Kazakhstan is of interest to Western intelligence services and governments as a country that can influence the fate of China and Russia, which Washington in its documents calls its two main opponents in the 21st century,” Dmitry Novikov, deputy chairman of the State Duma’s international affairs committee, told the RIA Novosti news agency.

Other lawmakers have blamed the unrest on radical Islamists. Konstantin Kosachev, deputy speaker of the Federation Council, claimed in a Facebook post “well-trained militants from radical gangs” primarily based in Afghanistan had infiltrated the protests.

“This is no longer a civil protest, and even less an internal affair of Kazakhstan, but a threat to all of us,” he said.

Moscow has presented no evidence to date that the protests have been incited by either Western governments or outside Islamist organizations.

The protests began on January 2 in response to a spike in fuel prices. On Tuesday evening, violent clashes between demonstrators and police occurred in cities and villages across the country. In Almaty, the largest city and former capital, protestors set fire to the presidential residence, stormed police stations and administration buildings, raided gun stores, and temporarily seized control of the local airport.

In a bid to defuse the situation, Tokayev on Wednesday dismissed the government and instituted a six-month price control regime for fuel. These measures did little to ease the protests, however, prompting the  president several hours later to introduce a national state of emergency and invite CSTO troops into the country.

On Thursday, hundreds of Kazakh troops and armored vehicles began forcibly dispersing protestors. Russian news outlets with correspondents on the ground reported gunfire between the two sides. The Kazakh internal affairs ministry said more than 2,000 protestors were detained and about a dozen killed in Almaty on Thursday.

Sharing a 4,750 mile border, Russia and Kazakhstan have strong geographic, historical, and political ties. Kazakhstan was part of both the Russian Empire and the Soviet Union. After gaining independence in 1991, it maintained a close relationship with Russia, joining both the CSTO and the Eurasian Economic Union, a Moscow-led trade bloc.

Kazakhstan is also home to a large Russian ethnic minority. According to a 2021 national census, Russians were the second largest ethnic group, accounting for more than 18 percent of the population. Some Russian nationalists argue that the northern regions of Kazakhstan are historic Russian lands that were unlawfully given away by the Soviet government.