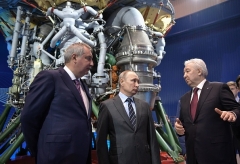 Moscow (CNSNews.com) – Looking to strengthen its space cooperation with China amid heightened geopolitical tensions with the United States, Russia is in talks with Beijing about the possibility of building a joint lunar research base.

Dmitry Rogozin, the head of Russian space agency Roscosmos, held talks recently with the director of the China National Space Administration, Zhang Kejian. He revealed in an interview with state television late last week that the two had “agreed that we will probably research the moon and build a lunar research base together, Russia and China.”

The news comes amid signs of growing strain in the decades-long cooperation between the United States and Russia in space.

In an interview with Komsomolskaya Pravda tabloid earlier this month, Rogozin criticized NASA’s Artemis Program, which aims to send astronauts back to the moon by 2024. He called it a “political project” resembling NATO and declared that Russia had no intention of participating.

Rogozin, a close ally of President Vladimir Putin and a former envoy to NATO, said Russia was instead looking to embark on new projects in space with China, whom he described as a “deserving partner” for Moscow.

“We do some things better than our Chinese colleagues. In some areas, they have broken ahead of us. But synergy is absolutely possible here.”

Space has been a linchpin of U.S.-Russian cooperation since the end of the Cold War. Even as relations between the two soured since the turn of the century, space remained one of the few areas of tightly-knit partnership.

Since NASA’s decision to retire its Space Shuttle program in 2011, the U.S. has relied on Russian spacecraft to deliver its astronauts to the International Space Station (ISS), paying Roscosmos up to $300 million a year for these trips.

But following Russia’s annexation of Crimea in 2014, the two countries began to decouple their space cooperation. The U.S. granted two multi-billion-dollar contracts to private aerospace companies SpaceX and Boeing to develop alternative ways to ferry NASA astronauts to the ISS.

On May 30, SpaceX successfully launched into orbit two astronauts aboard its Crew Dragon capsule, the first such trip into space from American soil in nearly a decade.

For its part, Russia has responded by expanding its space cooperation with China. The two signed a memorandum of understanding in June 2018, pledging to work together on lunar and deep space exploration. Another cooperation deal signed last September agreed on joint exploration of the moon and the establishment of a shared data center with hubs in both countries.

China has emerged as a major space power over the past decade, even surpassing the U.S. and Russia in certain areas. In January 2019, it became the first country to successfully land spacecraft on the far side of the moon. Just last week, China launched its first mission to Mars, paving the way for it to become the only country other than the United States to deploy a rover to the Red Planet.

Some Russian experts have expressed hope that with China’s vast financial resources and Russia’s extensive experience, the two countries will be able to form a potent partnership in space.

“China now has the technical and financial capabilities to reach the moon, and we have huge scientific reserves, scientific and theoretical, which we cannot realize in view of the rather poorly funded space program,” Maxim Tsukanov, director of the Soviet Space community – an expert society focused on historical and contemporary space issues – told the state-run Parliamentary Gazette.

“If we get a joint space venture between China and Russia, it will be a very mutually beneficial cooperation, and I really hope, I really hope that everything will work out.”