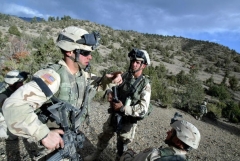 Moscow (CNSNews.com) – Russia on Sunday slammed media reports charging that it paid Taliban-linked militants to kill U.S. troops in Afghanistan, dismissing them as “another piece of fake news.”

The foreign ministry accused the U.S. intelligence community of fabricating the allegation and leaking it to the media in a bid to disrupt the ongoing Afghan peace process.

“We have paid attention to another piece of fake news, launched in the media space by the American intelligence community, about the alleged involvement of Russia’s military intelligence unit in contract killings of U.S. troops in Afghanistan,” the ministry told the TASS state news agency.

“That unpretentious fake clearly demonstrates low intellectual abilities of U.S. intelligence propagandists who have to invent such nonsense instead of devising something more credible.”

“Nevertheless, what else could be expected from the intelligence agency that has failed miserably in the 20-year-long war in Afghanistan,” it added.

The comments were in response to a New York Times report claiming that U.S. intelligence officials had concluded “that a Russian military intelligence unit secretly offered bounties to Taliban-linked militants for killing coalition forces in Afghanistan – including targeting American troops.”

Citing anonymous U.S. intelligence officials, the report said President Trump and the National Security Council had been briefed on the matter in late March, but that the White House had yet to authorize any response.

“Zero evidence, zero reliable data, zero confirmation – a reasonable assessment of the latest fake of the American mainstream media that Russia paid the Taliban for the killing of American soldiers,” tweeted Senator Alexei Pushkov, a member of the Foreign Affairs Committee in the upper house, the Federation Council. “We have already heard citations of intelligence before the Iraq War: a patent lie.”

Sergei Ordzhonikidze, a retired veteran Russian diplomat told the state news agency RIA Novosti that the Times report “is typical in the spirit of the Cold War. This is primarily an attempt to exert a psychological impact on our diplomats through intimidation, threats, and all kinds of fakes based on complete fables.”

The White House has denied that Trump was briefed about intelligence indicating that Russia had put out a bounty for U.S. troops in Afghanistan.

“While the White House does not routinely comment on alleged intelligence or internal deliberations, the CIA director, national security adviser, and the chief of staff can all confirm that neither the president nor the vice president were briefed on the alleged Russian bounty intelligence," said White House press secretary Kayleigh McEnany in a statement on Saturday.

Director of National Intelligence John Ratcliffe also challenged reports that Trump had been briefed about the reported intelligence.

“I have confirmed that neither the President nor the Vice President were ever briefed on any intelligence alleged by the New York Times in its reporting yesterday,” Ratcliffe tweeted. “The White House statement addressing this issue earlier today, which denied such a briefing occurred, was accurate. The New York Times reporting, and all other subsequent news reports about such an alleged briefing are inaccurate.”

A spokesman for the Taliban, Zabihullah Mujahid, called reports that the group had received financial support from Russia “false and baseless.”

In a statement he insisted that the Taliban had “neither sought nor received any aid from any country or intelligence agency in 19 years of war,” and that all of its attacks on U.S. troops in Afghanistan had been done with the group’s own resources.