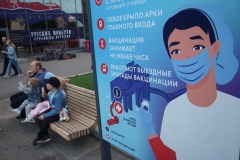 Moscow (CNSNews.com) – More than a dozen Russian cities and regions have introduced compulsory vaccinations for certain categories of workers, in response to a surge of new COVID-19 infections in the country.

Moscow became the first to issue a compulsory vaccination order last week, when the capital’s government announced that 60 percent of municipal and service-sector workers would be required to get vaccinated before August 15.

As of Monday evening, similar instructions had been issued in St. Petersburg, the country’s second largest city, and in 12 regions across Russia.

Earlier, Labor Minister Anton Kotyakov warned that Russian workers who refuse vaccination could be suspended from work without pay indefinitely.

‘If the health authorities in a region make vaccination mandatory for some categories of workers, an unvaccinated employee could be suspended,” he wrote on the Telegram messaging app.

Beyond compulsory vaccinations for some sectors, several Russian cities have banned mass gatherings, instituted curfews on bars and restaurants, and adopted quotas for the number of people allowed at cultural venues such as museums and theaters.

Moscow Mayor Sergey Sobyanin said the city government was considering requiring bars and restaurants that operate at night to check the vaccination status of their patrons by scanning QR codes on their phones.

The push for compulsory vaccinations for some workers represents a sharp shift of policy for Russia. For months, officials have repeatedly stated that the country had no intention of making vaccinations mandatory for anyone, with President Vladimir Putin calling the idea “impractical and impossible” as recently as late last month.

However, that was before new infections sharply escalated over the past two weeks. On Monday, Russia reported 17,378 new coronavirus cases, 7,584 of them in Moscow. The situation  in the capital has slightly improved since Friday and Saturday, when the city registered a record-high more than 9,000 cases for two days in a row.

The surge has been driven by the “Delta” variant of COVID-19, which was originally identified in India earlier this year and has since spread to more than 80 countries. Preliminary studies indicate that the variant is significantly more contagious and deadly than either the original strain or the “Alpha” variant, first detected in the United Kingdom. Scientists have also warned the Delta variant appears to be more resistant to vaccine and antibody drugs than earlier strains.

According to Sobyanin, the Delta variant accounts for nearly 90 percent of the new coronavirus cases in Moscow.

The surge has occurred despite the fact Russia has developed four vaccines against the virus – Sputnik V, EpiVacCorona, CoviVac, and the one-dose Sputnik Light. Sputnik V has been registered in more than 65 countries, making Russia a major global vaccine supplier, along with the United States and China.

Mass vaccinations began in Russia in December, although only 12 percent of the population has been fully vaccinated so far. By contrast, about 48 percent of Americans and 36 percent of Chinese have been inoculated.

The slow vaccination drive in Russia is attributed mainly to widespread public distrust, even though independent studies have shown Sputnik V to have a 91.2 percent effectiveness rate.

Independent pollster Levada Center found last month that 62 percent of Russians were unwilling to be vaccinated with Sputnik V, compared to 26 percent who were willing to receive the vaccine. Ten percent had already done so.

Health officials initially tried to overcome skepticism by offering incentives, ranging from free circus tickets to entries in a lottery to win a car.

Such incentives had only a marginal impact on boosting vaccinations, however, prompting officials to argue that they have no choice other than to make vaccinations compulsory for certain categories of workers.

Vaccination “is a personal matter as long as you sit at home or in the countryside,” Sobyanin wrote in a statement last week. “But when you go out into public places and come into contact with other people, willingly or unwillingly, you become an accomplice of the epidemiological process.”

Some experts are warning that the policy of compulsory vaccinations for some could backfire, however.

“The level of mistrust in the vaccine and official recommendations is so high that today people not only do not want to be vaccinated, but if forced to do so, more of them would rather buy a certificate stating they got vaccinated than actually get vaccinated,” Vasily Vlasov, an epidemiologist at the Moscow-based Higher School of Economics, told news website Fontanka.ru.

Vlasov argued that the government was at fault for public skepticism about vaccination.

“So long as we are forbidden to sit on benches in parks and required to wear gloves, there will be not only idiots who are afraid of microchipping among the vaccine deniers, but also normal people who are trying to find a rational way of behaving,” he said. “They need help to make the right choice, without pressure.”

“Microchipping” refers the widespread conspiracy theory in Russia that global elites are pushing vaccination as a means of inserting microchips into people.