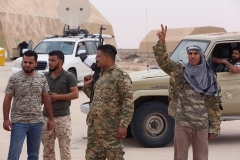 Fighters loyal to Libya’s internationally-recognized Government of National Accord (GNA) at an airbase southwest of Tripoli last month. (Photo by Mahmud Turkia/AFP via Getty Images)

Moscow (CNSNews.com) –  Russia is reportedly stepping up its involvement in the Libyan civil war, which has in recent years has become a heated proxy conflict drawing in numerous foreign players, driven by a range of motives.

“Russia is clearly trying to tip the scales in its favor in Libya,” said Gen. Stephen Townsend, head of U.S. Africa Command. “Just like I saw them doing in Syria, they are expanding their military footprint in Africa using government-supported mercenary groups like Wagner.”

“For too long, Russia has denied the full extent of its involvement in the ongoing Libyan conflict,” Townsend added. “Well, there is no denying it now.”

A recent U.N. report, confidential but seen by Reuters, says that between 800 and 1,200 Wagner Group mercenaries are fighting in Libya on behalf of Khalifa Haftar, a rogue military commander whose forces control the eastern part of the country.

Haftar is waging a war against the internationally-recognized government of National Accord (GNA), based in Tripoli and led by Prime Minister Fayez al Sarraj.

A senior Russian official on Tuesday denied sending mercenaries to support Haftar. Moscow has also claimed it has not deployed fighter jets to Libya.

The U.S. has also accused Russia of providing Haftar with economic aid. In late May, the Maltese government seized $1.1 billion worth of Libyan dinar banknotes that had been printed in Russia, and was headed by ship for eastern Libya.

In response, the Russian foreign ministry said that Libya has two central banks, and that the one based in Benghazi – which is controlled by Haftar – had commissioned the banknotes from Russia under a 2015 contract.

The Libyan civil war began in 2011, when a NATO-backed uprising toppled longtime dictator Muammar Gaddafi. In 2014, a “second” civil war erupted, and has drawn in several outside actors. In addition to Russia, Haftar receives support from the United Arab Emirates, Egypt, and occasionally France.

The GNA, meanwhile, is supported militarily by Turkey and Qatar.

The foreign players have different motives for their involvement.

For the UAE and Egypt, Haftar represents a bulwark against a takeover of Libya by Islamist groups like the Muslim Brotherhood – a coalition partners of Sarraj’s GNA. Both countries have reportedly helped to arm Haftar, in violation of a 2011 U.N. embargo.

Turkey began ramping up its military assistance for the GNA earlier this year, after it agreed to provide Ankara with access to gasfields in the Mediterranean.

With the support of Turkish weapons and Turkey-backed Syrian mercenaries, GNA forces have been able to turn the tide against Haftar in recent months.

(Not coincidentally, the governments of Turkey and Qatar are both sympathetic to the Muslim Brotherhood.)

In contrast to other foreign players in Libya, Russia is less invested in seeing a particular side prevail, according to Kirill Semenov, a Middle East and North Africa expert at the Russian International Affairs Council.

“Russia’s objective is not to support Haftar, but rather to strengthen its own position in Libya,” he told CNSNews.com. “Through whom that goal is achieved is not that principally important, be it Haftar or Sarraj. In that sense, Moscow’s approach differs from that of the United Arab Emirates or France, who have a clear stake in Haftar as a personality.”

Semenov said the presence of Russian mercenaries provides a means for the Kremlin to exert influence in the country. For the Wagner Group, he said, the motivation was primarily a commercial one.

“Russia clearly has influence over [Wagner], but their funding does not come from Moscow,” he said. “ We cannot unequivocally conflate them with Moscow, because if there was no financing on the part of the United Arab Emirates or Haftar, then there would be no mercenaries in Libya. Moscow would not send anyone if they weren’t getting paid.”

Russia has long been critical of Western involvement in Libya, and strenuously opposed NATO’s role in ousting Gaddafi.