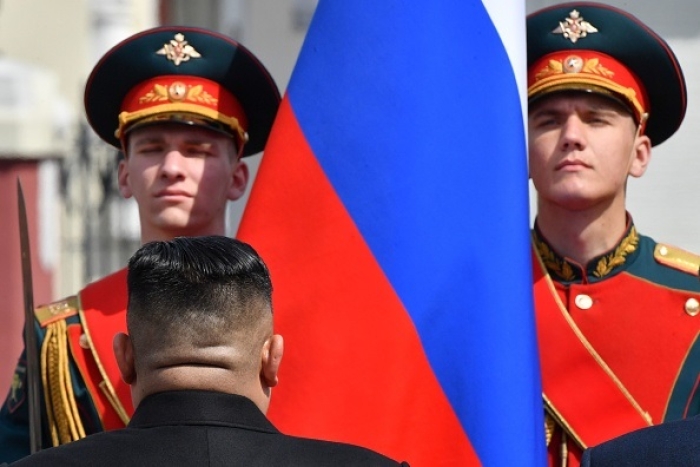 Moscow (CNSNews.com) – The conflict in Ukraine is providing Russia with an unexpected impetus to strengthen cooperation with North Korea, with talk of Pyongyang providing labor to rebuild the war-ravaged Donbass – and even claims it could deploy troops to help Moscow’s military campaign.

Denis Pushilin, head of the “Donetsk People’s Republic” – one of the two Moscow-backed breakaway regions in the Donbass – said on Tuesday talks were underway to bring North Korean construction workers to the region.

While he said he could not provide an exact date for their arrival, it “should already begin this year.”

North Korean workers, he said, were “highly qualified, hardworking, and ready to work in the most difficult conditions.”

The proposals, however, could potentially run afoul of United Nations sanctions against Pyongyang.

A 2017 U.N. Security Council resolution required all U.N. member-states to repatriate North Korean workers by December 22, 2019, and refrain from hiring them after that date.

These measures were designed to deprive Kim Jong Un’s regime of revenues it could use to develop its nuclear weapons and ballistic missiles programs. Russia joined the other 14 members of the council in voting for the resolution.

Meanwhile there have also been claims that North Korean has offered military assistance to Russia’s campaign in Ukraine.

Igor Korotchenko, an influential military expert who previously chaired an advisory board for the Russian Defense Ministry, told state television last week that North Korea had offered to send 100,000 troops to support the Russian military in Ukraine.

“We shouldn’t be shy in accepting the hand extended to us by Kim Jong Un,” he said. “If North Korean volunteers with their artillery systems, wealth of experience with counter-battery warfare and large caliber multi-launch rocket systems want to participate in the conflict, let’s give the green light to their volunteer impulse.”

Korotchenko did not reveal the source for his claim and neither government has confirmed it. CNSNews.com invited comment from Korotchenko and the North Korean Embassy in Moscow, but received no response by press time.

Artyom Lukin, professor of international relations at the Far Eastern Federal University in Vladivostok, said although it was highly unlikely that North Korea had made the offer, it was not entirely impossible.

“After all, Moscow could reward Pyongyang with supplies of oil and grain, among other things,” he tweeted.

Other experts joined Korotchenko in arguing that North Korean weaponry could provide a boost to Russia’s military operation.

“Having such systems with trained crews – either their own or consisting of military advisor – the [Donbass forces] could independently conduct high-precision strikes against Ukrainian command posts, warehouses, and bridges at a distance of up to 200–250 kilometers,” he told the News.ru media outlet.

The Soviet Union played a decisive role in the establishment of communist North Korea and during the Cold War was its main trading partner and financial sponsor, although cooperation became far more limited in recent decades.

Following the collapse of the Soviet Union in 1991, Moscow slashed nearly all of its economic aid, and over the next three decades, economic links between the two countries experienced a steep decline – a process exacerbated by international sanctions against Pyongyang and the coronavirus pandemic.

Last year, official trade turnover fell to a paltry $40,000, according to data from the Russian Federal Customs Service.

Yet the Ukraine crisis appears to have provided North Korea with an opportunity to rekindle the partnership.

In April, state newspaper Rodong Sinmun published an article appearing to endorse the Kremlin’s decision to send troops into Ukraine. “We are sending our full support and showing solidarity to the justified struggle of the Russian people to protect the autonomy and security of the country and to defend national interests,” it stated, though without mentioning Ukraine directly.

Last month, North Korea became the third country after Russia and Syria to officially recognize the two “people’s republics” in Donbass. Ukraine condemned the decision and responded by severing diplomatic ties with Pyongyang.