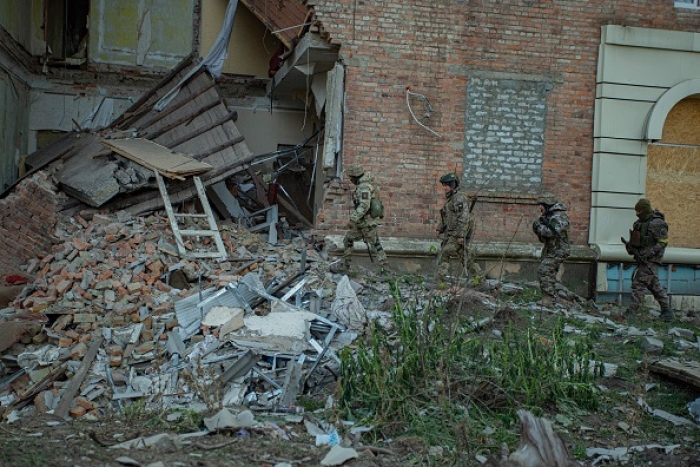 Ukrainian soldiers amid the rubble of a destroyed building in Bakhmut last week. Russian troops have been trying to take the town in the eastern Donbass for several months. (Photo by Yan Dobronosov / Global Images Ukraine via Getty Images)

(Adds comment from the Western private military company known as the Mozart Group.)

Moscow (CNSNews.com) – Russian and Ukrainian troops are locked in a bloody and intense battle for control of a strategic town in the Donbass region of eastern Ukraine, with mercenaries from the Wagner Group at the forefront of the Russian offensive.

Bakhmut, which had a population of 70,000 people before the conflict, has been under siege by Russian forces since August. With several highways passing through it, the town serves as an important transport hub in the eastern Donetsk region.

Fighting near Bakhmut has intensified in recent weeks, with the Russian military launching a renewed offensive backed by troops that were freed up by the withdrawal from Kherson last month. Ukrainian war correspondents likewise report that Russian artillery and aviation has stepped up the bombardment of the town.

Russian forces claim to have captured three settlements located on the southern outskirts over the past several days, an assertion CNSNews.com was not able to independently verify.

Recent videos and pictures posted on social media show the streets of Bakhmut covered in rubble from destroyed buildings, combat medics racing through the ruins to evacuate wounded Ukrainian soldiers, and mud-filled trenches on the town’s outskirts.

The images have prompted some observers to draw comparisons with the Battle of Verdun in World War I, a grueling and bloody showdown between French and German forces that lasted nearly all of 1916.

Russia’s attacks on Bakhmut have been spearheaded by mercenaries from the Wagner Group, a private military company that has previously fought in Syria, Libya, the Central African Republic, and Mali.

Yevgeny Prigozhin, the company’s founder and owner, declared that the main purpose of the Bakhmut offensive is to create a “meat grinder” for Ukrainian troops.

“Our focus is not on Bakhmut itself, but the destruction of the Ukrainian army and the reduction of its combat potential, a development which will have an extremely positive effect on other areas,” he said in a statement to the press last week.

Both sides are believed to have suffered substantial casualties during the battle. In a video address last Saturday, Ukrainian President Volodymyr Zelenskyy called Bakhmut the “the most heated and painful” flashpoint for Ukrainian forces.

There are no indications that Kyiv is preparing to surrender the town yet, however. On the contrary, the Ukrainian military has moved to reinforce its troops in Bakhmut with foreign volunteers, special forces units, and territorial defense militias.

Ukrainian forces in Bakhmut have been aided by the Mozart Group, a private military company that was founded earlier this year by retired U.S. Marine Special Forces Col. Andrew Milburn.

The group’s LinkedIn page states that it is helping to train, equip, and advise Ukrainian troops, although Milburn told the Guardian in August that group members were prohibited from directly participating in combat.

Nina Hébert, a spokesperson for the Mozart Group, told CNSNews.com that the organization “does not participate in any combat missions.”

“We are unarmed non-combatants with two missions: humanitarian aid and evacuation, and providing training upon request and at no charge to Ukrainian military units,” she wrote in an email.

Capturing Bakhmut would provide Russian forces with a potential beachhead for a new offensive in the Donetsk region. The town provides a direct route to the Ukrainian strongholds of Slavyansk and Kramatorsk. Moscow has repeatedly said driving Ukrainian forces completely out of the Donbass is one of Russia’s primary military objectives.

Yet some Russian officers and defense analysts have expressed skepticism about the benefits of committing so much manpower to the siege of Bakhmut.

“The experience of the first phase of the [Russia-Ukraine conflict] shows that local successes are more easily achieved within the framework of a major offensive, when the enemy does not know what objects to grab onto,” Alexander Khodakovsky, commander of Russia’s Vostok Battalion – which is fighting in Donbass – wrote in a post on Telegram.

“Therefore, I am not a supporter of a ‘piecemeal’ approach, which turns each battle into a meat grinder and does not allow us to form the resources necessary to conduct larger-scale offensives.”