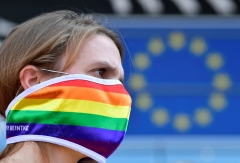 “In response to the backsliding of LGBTIQ rights in some European Union countries, notably Poland and Hungary, MEPs [EP Ministers] declared the European Union an ‘LGBTIQ Freedom Zone’ on Thursday,” stated the release.

But tonight we raise a glass on our wonderful 🌈 community. pic.twitter.com/HwkBxpUqWe

German MEP Terry Reintke tweeted in celebration of the resolution, “And now: Just two citizens of #LGBTIQFreedomZone European Union celebrating a bit. Tomorrow, the struggle continues. But tonight we raise a glass on our wonderful community.”

“Since March 2019, more than 100 Polish regions, counties and municipalities have adopted resolutions declaring themselves to be free from LGBTIQ ‘ideology,’” stated the Parliament in its release. “According to these resolutions, local governments should refrain from encouraging tolerance towards LGBTIQ people and withdraw financial assistance from organisations promoting non-discrimination and equality.”

The Parliament declaration claimed that “‘’LGBTIQ-free zones’ are part of a broader context in which the LGBTIQ community in Poland is subject to increased discrimination and attacks, notably growing hate speech from public authorities, elected officials (including the current president), and pro-government media. They also deplore the arrests of LGBTIQ rights activists, and the attacks and bans on Pride marches.”

The declaration also criticized Hungary, noting that its government had “adopted constitutional amendments that further restrict the rights of LGBTIQ people, that do not take the existence of transgender and non-binary persons into account and limit their right to a family life.”

In Poland, same-sex relationships are not recognized and same-sex couples are prohibited from adopting, but they have been able to get around this rule by adopting as a single parent.

The Rainbow flag is seen on the Berlaymont, the headquarters of the European Commission for the Gay pride and LGBT pride on May 16, 2020, in Brussels, Belgium. (Photo by Thierry Monasse/Getty Images)

The BBC News reported, “Under the new law [in Poland], authorities will be required to perform background checks on anyone applying to adopt a child as a single parent. If a person is found to be applying as a single parent when they are in a same-sex relationship, they will be criminally liable.”

The European Resolution states that, "LGBTIQ persons everywhere in the EU should enjoy the freedom to live and publicly show their sexual orientation and gender identity without fear of intolerance, discrimination or persecution, and authorities at all levels of governance across the EU should protect and promote equality and the fundamental rights of all, including LGBTIQ persons.”

LifeSiteNews reported, “Poland’s pro-life, pro-family majority has been under assault by foreign-funded LGBT and pro-abortion lobbies in recent years, literally so during recent demonstrations targeting Catholic churches for disruption and vandalism. Nevertheless, political promises to support families financially and to keep LGBT ideology away from children have been rewarded at the ballot boxes, as Poland’s President Andrzej Duda demonstrated when he was re-elected last July.”