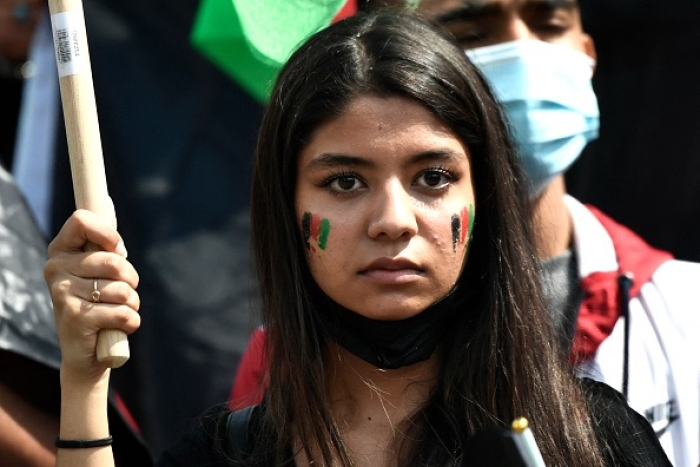 Paris (CNSNews.com) – Hundreds of Afghans, most of them women, demonstrated in central Paris this week to mark the one-year anniversary of the Taliban’s seizure of power in Kabul, while the embassy of Afghanistan, staffed by diplomats appointed by a government that no longer exists, continues to operate.

Carrying placards with slogans about the deprivation of rights under the fundamentalist militia, the women shared with reporters concerns about loved ones who have been unable to flee Afghanistan, as they had been able to do.

Twenty three-year old artist Atifa who fled to Afghanistan a year ago said to Europe 1 radio that “August 15, 2021, was a date that changed my life forever,” 23-year-old Atifa told Europe 1 radio. “That day, I suddenly gave up everything. I lost everything.”

She added that she was doing very well in France. “I am an artist, I am free now.”

Samia, who is studying political science in Paris, said that in her homeland, “women no longer have the right to leave their homes without having their faces covered, without the black outfit imposed by the Taliban.”

Mohammad Homayoon Azizi, the ambassador of Afghanistan who was appointed by the former Ashraf Ghani government, said the embassy continues to operate as usual, a year after that government was ousted.

“We have been recognized as the legitimate representative of his country by the French authorities,” he told France 24 television. “But there is still no legitimate Afghan government in my country.”

Together with the handful of staff remaining, Azizi said he continues to represent citizens and carry out his diplomatic duties, at his own expense.

Azizi said that despite heavy demands and few staff, the embassy continues to help Afghan nationals, providing documents to enable those wanting to leave to do so safely.

Ghani fled Afghanistan as the Taliban descended on Kabul last August, as the withdrawal of U.S. forces reached its final stages. Azizi said the ousted president “made mistakes,” but he still recognizes his government – and only his government.

Afghanistan’s ambassador in Paris also serves as the country’s representative to the U.N. Educational, Scientific and Cultural Organization (UNESCO), which is based in the French capital.

Azizi said he continues his duties there as well, as he works with diplomats and media to urge the international community not to abandon his country and it 39 million people, most of them facing alarming humanitarian conditions.

“Currently, Afghanistan is like a big jail, but even in jail, inmates have some rights,” he said. “In Afghanistan, the population doesn’t even have rights like prisoners have.”

“Before the Taliban returned to Kabul, there were 19 of us [working at the mission],” according to Azizi’s assistant, Shabir Bakhshi. “Today, we are only six, including three diplomats.”

Maria Akhtari, who works as a consular official at the embassy, said she has just three colleagues – down from ten before last August – and they struggle to deal with a growing number of requests from citizens.

She said exit permits which the embassy continues to issue to Afghans wishing to leave the country are still being accepted by Taliban border officials, for now.

After the Taliban takeover French forces helped to evacuate 2,600 Afghans to France, where the community is around 45,000 strong. By the time Kabul fell, all Afghan employees at the French Embassy, the French Cultural Institute, and a French archaeological delegation had already been safely evacuated to France.

French Ambassador to Afghanistan David Martinon, who has been working from Paris since the takeover, told Franceinfo public TV this week that he still receives requests from Afghans wanting to leave.

“When we can, we do it,” he said, “but it has become extremely difficult to get Afghans out.”