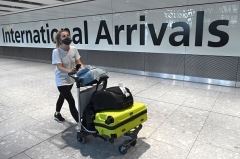 Paris (CNSNews.com) – Amid a surge of coronavirus cases in Spain, a number of European countries are reimposing travel restrictions on people arriving from that country, and French authorities are warning of potential setbacks here.

“Viral circulation is sharply increasing in France,” the Directorate General of Health (DGS) said on Tuesday. “With a number of daily cases exceeding 1,000, we have returned to levels comparable to those at the end of the lockdown period.”

The number of deaths blamed on COVID-19 in France recently passed the 30,000 mark, the third-highest in Europe after Britain (almost 46,000) and Italy (just over 35,100). On Monday the DGS reported that 130 separate outbreaks were under investigation, seven of which had emerged in the previous 24 hours.

It said the number of new infections had risen by 26 percent compared to last week.

But all eyes are on Spain, where more than 6,300 new cases were reported to the World Health Organization (WHO) on Tuesday.

Spain, the world’s second most-visited tourist destination, had been hoping to salvage part of its summer season by showing itself to be a safe destination, but the current surge in cases is threatening that.

France, Germany and Britain have all advised their citizens traveling to Spain to avoid badly-hit northern regions, such as Catalonia, which borders southern France.

Going a step further, Britain has advised citizens to avoid all non-essential travel to the Spanish mainland, and announced that all travelers arriving from Spain will have to undergo mandatory quarantine for two weeks. Britons make up the largest number of foreign tourists to Spain by far each year.

Spain has recorded more than 278,000 confirmed cases of COVID-19 since the crisis began, and more than 28,400 deaths – the fourth-highest death toll in Europe.

Belgium is also on the alert for the possibility of a “second wave” of infections, and the government has implemented measures including a prohibition of groups of more than five people in any indoor or outdoor setting.

Belgium has recorded around 9,800 COVID-19 deaths and more than 66,000 cases, and it remains the country with the second-highest number of deaths per capita – 85.9 deaths per 100,000 people. (Only tiny San Marino, with a population of less than 34,000, has a higher per capita rate, according to Johns Hopkins University data.)

Meanwhile in France, Prime Minister Jean Castex has announced that with effect from August 1, coronavirus tests will be mandatory for travelers arriving at airports and ports from 16 countries, including the United States, India, Brazil, Algeria and Turkey.

Passengers from some of those countries (including the U.S.) will have to present proof of a negative test less than 72 hours old before departing from those countries for France, while those from the other “red” list countries will be tested on arrival in France.

The European Union’s external borders, closed in mid-March, were partially reopened on July 1, but remain closed to most non-European nationals.

According to the French health ministry, all regions are under threat of a potential surge. Mask-wearing is already mandatory in indoor public places and transportation, and some local mayors are making it compulsory in outdoor settings as well.

The government has appealed to the population to stay alert and not move away from precautionary behavior, warning that circulation of the coronavirus remains strong.

Since the pandemic began, France has recorded more than 208,000 confirmed cases and around 30,200 deaths.

WHO emergency director Michael Ryan said during a virtual briefing on Monday that border closings alone do not constitute a viable strategy to fight against the coronavirus.

“It’s going to be almost impossible for individual countries to keep their borders shut for the foreseeable future,” he said. “Economies have to open up, people have to work, trade has to resume.”

Ryan said WHO believes, however, “that it is possible to identify and minimize the risk associated with international travel,” citing measures including health checks on travelers and strict contact tracing.