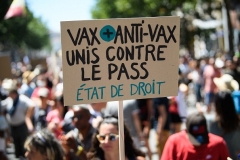 A protestor’s placard makes the point that there are people with both pro- and anti-vaccination views who are united in opposition against the government’s ‘heath pass’ mandate. (Photo by Clement Mahoudeau/AFP via Getty Images)

Paris (CNSNews.com) – Some social media stars in France claim to have been approached by a mysterious marketing agency and asked to use their platforms to denigrate the Pfizer COVID-19 vaccine.

Léo Grasset, whose science-focused YouTube channel has 1.2 million followers, is one of those who say a marketing agency approached him last spring about posting messages for a fee – for an anonymous client – calling into question the safety and efficacy of the vaccine.

Earlier, Grasset tweeted that when he looked into the London-based agency the address given was “bogus,” and actually belonged to an aesthetic laser clinic. He said the agency employees’ LinkedIn profiles, since erased, indicated that they had worked previously in Russia.

The French government has not approved Russia’s anti-COVID 19 vaccine, Sputnik V, for use in France. Some social media users here suggest that may be behind alleged efforts by Russians to denigrate other vaccines.

There have also been claims that Russia or Russians could be involved in efforts to encourage protests in France against the government’s new anti-pandemic measures.

The measures include a requirement to show a “health pass” – providing proof that the holder has been vaccinated against or has tested negative for COVID-19 – before entering certain public venues, including theaters and restaurants.

Street protests, supported both by people opposing vaccines and others concerned about government overreach, have attracted as many as 160,000 people across the country, according to the interior ministry.

In an interview with French RTL radio last week, Christophe Castaner, a former interior minister and parliamentary leader of President Emmanuel Macron’s Republic in Motion party, claimed that anti-vaccination voices that have emerged on social media could have links to Russia.

Florian Philippot, a former vice president of the far-right National Rally party, called Castaner’s suggestion that Russia was involved in the opposition to the health pass an “official conspiracy.”

“For Castaner, behind the opponents of the health pass is ... Russia!” tweeted another prominent National Rally figure, Gilbert Collard. “Who is a conspirator now??? ”

Collard was referring to government claims that opposition to the health pass is being driven by unfounded conspiracy theories.

Health Minister Olivier Véran, a neurologist, is traveling around the country encouraging people to get vaccinated. He has also been asked by journalists if Russia or any other country could somehow be involved in “anti vaxx” sentiment.

“I don't know where it comes from,” he told reporters. “I don’t know if it comes from France or from abroad. Whether Russia is involved, I don't know. I wouldn’t allow myself to speculate.”

The government measures, being implemented from this week, include mandatory mask wearing in public places in southeastern regions of the country where the Delta variant of the coronavirus is spreading widely.