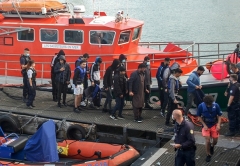 Illegal migrants plucked from a leaking inflatable boat in the Channel are escorted off a rescue vessel docked in Calais, northern France, last month. (Photo by Bernard Barron/AFP via Getty Images)

Paris (CNSNews.com) – Amid a surge of apprehensions of illegal migrants trying to reach Britain from northern France, the two governments have again been wrangling over the issue, with France saying the U.K. has not met its pledge to fund efforts to police the problem.

Earlier, Britain threatened to send intercepted migrants back to France.

During a weekend visit to two towns on the northern French coast, where migrants mostly from Africa and the Middle East gather and try to cross the Channel to reach England, French Interior Minister Gérard Darmanin called for a migration treaty between the European Union and Britain.

He also called for the deployment of Frontex, the E.U. border surveillance agency, in the Channel. Frontex has not work there previously, since Britain was a member of the E.U. until its formal departure in February last year.

Darmanin said Britain has not yet made good on an agreement to provide around $72 million, pledged in July, to strengthen coastal surveillance by the French police in a bid to fight irregular migration.

Last month Darmanin’s British counterpart, Home Secretary Priti Patel, warned that Britain may not pay the money due to a record number of migrant arrivals. After Darmanin’s weekend remarks, however, the British government confirmed that it would soon provide the funds.

Patel last month also threatened to return migrants intercepted in the Channel to France, even if that meant modifying Britain’s interpretation of international maritime law.

The Home Office said last weekend it had intercepted 1,115 migrants crossing the Channel in small boats over the course of just two days.

But France says it is doing its part too. Since the beginning of the year, French police say they have dismantled 18 networks of people smugglers – gangs that charge thousands of euros for places in makeshift boats for migrants to cross the Channel.

In addition, Darmanin said the apprehension of small boats used by illegal migrants had increased by 15 percent over the past three months, and that 50-65 percent of those attempting to reach the British coastline had been stopped.

In 2003 France the Britain signed an agreement aimed at stopping or at least reducing cross-Channel illegal migration by strengthening controls on the French side of the waterway.

Under the “Touquet agreement,” a border between France and Britain was established in the Pas-de-Calais region, with metal barriers, video surveillance devices, and the deployment of hundreds of police, gendarmes and customs officers.

Calais, a three-hour drive from Paris, is the gateway to the Channel Tunnel that links the two countries. The goal of the border policing efforts is to prevent illegal migrants from accessing the tunnel or ferry terminals.

Darmanin said the 2003 agreement is no longer effective, hence the need for a new one between the E.U. and Britain, which is now no longer a member of the bloc.

He told reporters that the primary objective of the French government was to prevent illegal migrants who hope to reach Britain from reaching France in the first place.

In that respect he welcomed a tightening of controls along the French-Belgian border, a popular route for migrants aiming to reach France’s Channel coast and from there try to get to Britain.

Migrants do not generally try to cross the Channel from the Belgian coast, since maritime traffic is heavier, currents are stronger, and the distance is almost twice as far as the shortest route between France and England.