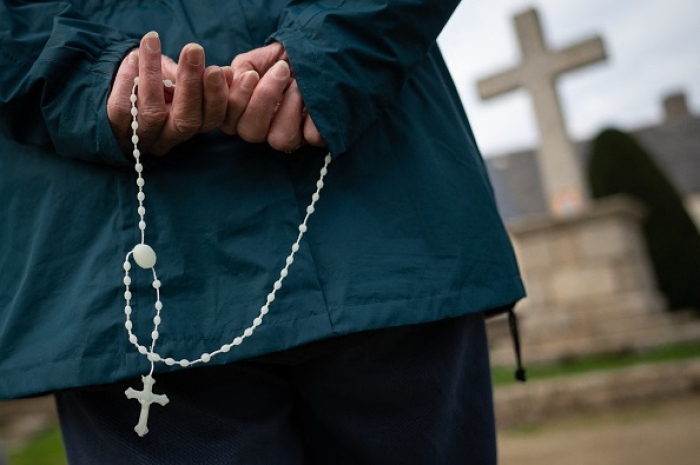 A Catholic visits a cross and statue of the Virgin Mary in western France. (Photo by Loic Venance / AFP via Getty Images)

Paris (CNSNews.com) – A new book by a former French culture minister has stoked debate over church-state separation and the value of continuing the upkeep of small churches in France, amid declining attendance.

In her book, Roselyne Bachelot suggested that “uninteresting little churches” should be demolished, rather than authorities having to find the funds needed for their renovation.

In the future, she wrote, “we will have to say no to certain restoration projects for buildings without heritage interest. It will be impossible to save all the churches in France, many of which weigh on the finances of local authorities.”

In making her arguments, Bachelot cited the 1905 French law that separates church and state. The law says the republic guarantees freedom of conscience and the free exercise of worship, restricted only in the interest of public order. The republic does not recognize, pay or subsidize any religion.

Although French church officials admit that there is a drop in attendance at churches and other places of worship, for many French people, even non-believers, churches are an important part of the heritage of French towns and villages and should be maintained.

In some towns, local authorities have transformed otherwise neglected churches into cultural centers, museums, art galleries, and even restaurants, while retaining the architectural features and elements of the original internal décor.

Bertrand de Feydeau, vice president of the preservation group Fondation du Patrimoine, said the churches Bachelot is talking about “have the function of a common home.”

“We encourage everything that allows people to stay in touch with their religion,” the 20 Minutes newspaper quoted him as saying.

According to a government information website, of the nearly 45,000 churches in France, between 2,500 and 5,000 risk being abandoned or destroyed by 2030.

The 1905 church-state law is also at the center of a controversy in a country district on France’s west coast, where an appeal court has upheld an order that a statue of the Virgin Mary, located at a crossroads in the La Flotte-en-Ré district, be removed.

Erected in 1945 by locals thankful for the safe return of soldiers from the community at the end of World War II, the large white statue was first located in a private garden, but was donated to local authorities in the 1980s and placed at a crossroads.

After the statue was damaged by a motorist in 2020, the council restored it, but this time placing it on an elevated plinth.

Last March the region’s administrative court ruled on its removal, agreeing with the arguments of the National Federation of Free Thought, a secularist association, that the statue violated the 1905 law, given its public location.

The law prohibits the installation of a sign or emblem demonstrating a religious preference in a public place.

On appeal, a court in Bordeaux has now upheld the ruling, ordering that the statue be dismantled within six months.

The region’s Catholic diocese lamented the decision, saying it “risks exacerbating the tendency to make Christian symbols ever less visible.”

Gilles-William Goldnadel, a prominent lawyer and author, told the weekly news magazine Valeurs Actuelles this week that secular associations are not merely wanting to enforce the 1901 law, but “in fact want to eradicate France’s Catholic past.”

The mayor of La Flotte-en-Ré, Jean Paul Héraudeau, who opposes the removal of the statue, told local media outlets that the case would be appealed before the Council of State, a governmental institution that serves as a Supreme Court for administrative justice.