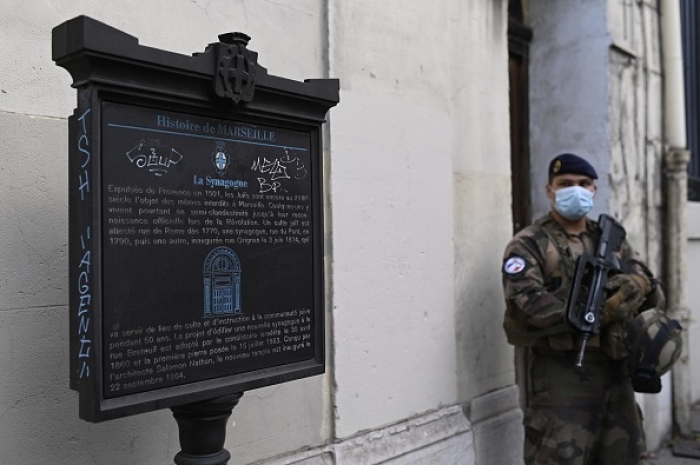 During an anti-terror operation, a French soldier stands guard at a synogogue in Marseilles. (Photo by Christophe Simon/AFP via Getty Images)

Paris (CNSNews.com) – With France commemorating the 80th anniversary of the World War II round-up of French Jews to be sent to Nazi concentration camps, a new report has found that racism against Jews remains a serious problem in this country.

Although French people are by and large more tolerant, racial discrimination persists, especially against Jews and Roma, the National Human Rights Consultative Commission  (NHRCC) said in a report.

The commission, which has issued an annual report on racism in France for the past 30 years, makes recommendations to state institutions and civil society on how to combat racism and antisemitism, although its role is only an advisory one.

“Certain racist, antisemitic and xenophobic prejudices remain alive and, above all, their expression is renewed, diversified, even intensified, depending on the context,” it said.

The report found discrimination to be based on real or supposed origin, religion, or color of skin.

The minorities who report facing prejudice on a daily basis, including in the workplace, include Jews, Roma, Muslims, and – to a lesser extent – black citizens of France.

The NHRCC recommended that the government adopt a national action plan for digital citizenship training. The aim would be to help schools to provide greater awareness about racism to children at all ages, starting at a primary level.

It also advised the government to provide better training regarding prejudice and discrimination for law enforcement professionals.

Jean-Pierre Raoult, representative of a Paris-based NGO called Movement against Racism and for Friendship Between Peoples, told L'Humanité that “the fight against racism is not a priority for the government, which doesn’t fully realize the seriousness of the situation.”

He said the report’s findings should prod government leaders to step up the fight against antisemitism, and all forms of racism.

France has the largest Jewish community in Europe with just under 500,000 Jews, in a country with a population of some 63 million. There are around eight million Muslims in France, and an estimated 15,000-20,000 Roma.

Estimates of the size of the black population range from 2.5 to 7.5 percent of the total population of France, with overseas regions included.

The report was released at a time when France commemorates the anniversary of one of the country’s darkest wartime episodes, known as the “Vel d’Hiv round-up.”

Over two days in July 1942, thousands of French security officials under orders from the Nazis arrested more than 13,000 Jews in Paris and surrounding areas, including 4,000 children, to be sent to Nazi concentration camps.

The Jews were held at a Paris cycling stadium, Vel d’Hiv (Winter Velodrome), before being transported to the camps. Most did not survive the Holocaust.

At the time, France was divided between the collaborationist Vichy regime under Marshal Philippe Pétain, and “Free France,” led by Gen. Charles de Gaulle’s London-based government-in-exile. 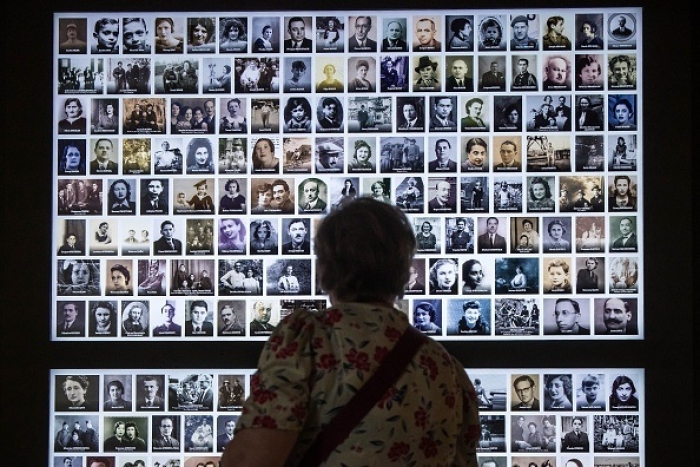 A memorial center in the village of Pithiviers bears witness to the thousands of French Jews who were rounded up by the collaborationist Vichy regime, and sent to Nazi concentration camps. (Photo by Christophe Petit Tesson / Pool /AFP via Getty Images)

French government officials, lawmakers, and leaders of Jewish and other religious organizations marked the 80th anniversary of the events.

President Emmanuel Macron delivered a speech in the small village of Pithiviers, from where eight convoys of Jews were dispatched to the Nazi extermination camp at Auschwitz-Birkenau in Nazi-occupied Poland.

Macron said the fight against antisemitism in France was “not finished” and denounced what he called a “new form of historical revisionism.”

It took France until 1995 before a president – Jacques Chirac – for the first time acknowledged the country’s responsibility for the round-up. In 2012, then-President François Hollande said on the anniversary that “this crime was committed in France, by France.”

During a presidential election campaign in 2017, politicians on both the far-right and far-left disputed the notion of national responsibility.

National Rally leader Marine Le Pen said “France” was not responsible for the notorious event, but “it was the responsibility of those who were running the country.”

Jean-Luc Mélenchon, head of the leftist Rebellious France movement, said subsequently that the Vichy regime was responsible, and did not represent “France.”