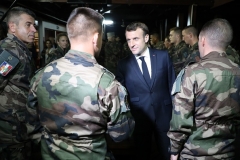 Paris (CNSNews.com) – The French government has hit back at claims by the prime minister of Mali that France is abandoning his country by withdrawing troops from a counter-jihadist mission there.

Armed Forces Minister Florence Parly called Prime Minister Choguel Kokalla Maïga’s accusations, made at the United Nations in New York at the weekend, “unacceptable and indecent” and accused him of “bad faith.”

“We have 5,100 soldiers [now] and we intend to leave several thousand in the region, and we are deploying state-of-the-art military equipment in the Sahel,” Parly said during a talk to political science students in Paris. “This isn’t the behavior of a country which intends to leave this region.”

Launched in 2014, Operation Barkhane is a mission to fight Islamist terrorism in the former French colonies in the Sahel – Mali, Chad, Burkina Faso, Niger and Mauritania.

Last June, President Emmanuel Macron announced that the operation would soon end with phased troop drawdowns, but that some French troops would remain as part of a broader international mission.

Parly noted that Maïga gave his speech just one day before a French soldier was killed in action in Mali – the 52nd French soldier to have “given his life to fight terrorism in the Sahel.”

A French foreign ministry official, commenting after Parly’s remarks, said, “The transformation of our military system in the Sahel is neither a departure from Mali, nor a unilateral decision, and it is wrong to say the contrary.”

The French plans entail reducing troop numbers from 5,100 to 3,500 within a year, with a further reduction to 2,500 in 2023. France will retain bases in Mali, focusing on areas near Mali’s border with Niger and Burkina Faso.

In his speech at the U.N. high-level meeting on Saturday, Maïga accused France of having “decided unilaterally to withdraw its troops from Operation Barkhane in northern Mali.”

Because of this, he added, Mali has initiated discussions with the Wagner Group, a Russian private military contracting agency believed to have close links with the Kremlin.

“When areas are abandoned, what do we have left?” he asked. “Look for alternatives.”

“The Malian authorities have turned to a private Russian military company because, if I understand correctly, France wants to considerably reduce its contingent which was supposed to fight against terrorism in the north,” Lavrov told reporters in New York. “But they [the French] did nothing and it is the terrorists who are leading the way.”

“Deployment of these mercenaries would be incompatible with keeping French troops in Mali, troops that have been fighting jihadists in the Sahel for eight years,” he said in New York.

“Wagner is a militia,” Le Drian said. “They have been active in the past in Syria and in the Central African Republic, with human rights violations and atrocities of all kinds.”

Since coups in August last year and May 2021, Mali has been ruled by a military junta which appointed Maïga as prime minister.

Parly charged that by inviting the Wagner group to Mali, the junta was effectively abandoning the commitments it had made to the international community to hand power back to a civilian government by organizing elections in February 2022.

Many Malians have been protesting the French military presence, which they say has not ended the jihadist insurgency despite being in the country for years. At demonstrations demanding the departure of French troops, Russian flags have sometimes been waved by protestors.

Niagalé Bagayoko, a political scientist specializing in security issues in French-speaking African countries, told media outlets here that “there is an old Malian dream, currently held by so-called patriotic elements, of seeing the country break with France and embracing cooperation with Moscow.”

She noted that France itself periodically accuses Russia of wanting to “take its place” in Francophone Africa.