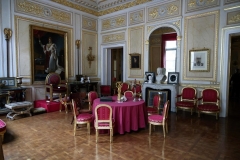 The interior of the luxurious Palais Vivienne property in central Paris. (Photo by Thomas Coex/AFP via Getty Images)

Paris (CNSNews.com) – French authorities have launched investigations to determine whether a clandestine dinner took place in the capital recently despite coronavirus lockdown restrictions – and whether any member of President Emmanuel Macron’s government was present.

The French television network M6 last weekend reported on a dinner allegedly held at a luxury residence in central Paris known as Palais Vivienne, owned by a wealthy businessman, Pierre-Jean Chalençon. Reporters who used a hidden camera to film the event claim that at least one member of the government was there.

The footage showed tables set out as though in a restaurant, with a “waiter” inviting guests to select from a menu with prices ranging from around $190 to $581. Guests, sipping what appeared to be champagne, did not “socially distance” or wear masks, and people were seen kissing each other on the cheek. (The network blurred the faces.)

After his name emerged in news reports Gabriel Attal, the government’s spokesman, firmly denied being present. His office said in statement that Attal does not know Chalençon and did not take part in any dinner.

The kerfuffle continued, however, as various ministers stepped up to deny that they or any of their colleagues were guests at this or any other dinner that would have been illegal under the most recent lockdown and 7 PM-6 AM curfew announced by Macron at the end of March.

Citizenship Minister Marlène Schiappa told the Cnews television channel that Attal had indeed received an invitation to the dinner, but had declined it.

She said that if it was proven that any minister or lawmaker was present, they “should be punished like any other citizen.”

Anyone found guilty of organizing parties or dinners that would be illegal under lockdown restrictions and could endanger the lives of others faces the possibility of 12 months’ imprisonment and a fine of up to $17,800.

Interior Minister Gérald Darmanin announced an administrative investigation after the broadcast, to look into whether any government members were present at Chalençon’s dinner, or had attended dinners at any restaurants which may have been operating in violation of the lockdown regulations.

“There are not two types of citizens – those who have the right to party and those who do not,” Darmanin told reporters.

Separately, Paris public prosecutor Rémy Heitz has launched an investigation to determine if any crime of endangering the lives of others had been committed. He told reporters that the judicial system “will find out who organized the dinner, disregarding health rules, and who participated in it, as both are not following the new rules.” He pointed out that people leaving the dinner to return home would also be breaking the curfew.

Danièle Obono, a lawmaker with the leftist movement Rebellious France, said she expects the results of the investigation quickly, as sleuths on Twitter had “already done half the job.”

Social media users launched a Twitter hashtag #wewantnames, urging witnesses to make public the names of ministers and any other prominent personalities who were present at the underground dinner.

One dinner participant, who was not identified during the original M6 program, said he had attended a few such clandestine dinners at which government ministers were present.

“I had dinner this week in two or three restaurants that are supposedly underground restaurants, with a number of ministers,” he claimed.

That person was later identified as Chalençon himself. In a television interview on Monday he denied that he had hosted a dinner but confirmed that he had many friends in government. He also added that Attal was “due to come to dinner soon at the Palais Vivienne.”

Amid a continuing uproar, Chalençon in another interview accused the M6 network of “false and slanderous” allegations.

In a statement, the network’s editorial staff said they rejected Chalençon’s accusations.

Paris police said they monitor each day between 300 and 400 eating establishments that are open to the public, but only for takeaways. No restaurant in France has been open for normal dining since last October.