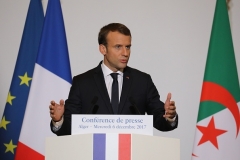 French President Emmanuel Macron during a visit to Algeria in 2017. (Photo by Ludovic Marin/AFP via Getty Images)

Paris (CNSNews.com) – Frustrated by North African governments’ slow-walking of procedures required to repatriate their citizens who are in France illegally, the French government ordered severe cuts to the number of visas issued to Algerians, Moroccans and Tunisians, sparking a diplomatic row.

The governments of the three former French colonies responded angrily to the decision to limit the number of their citizens allowed to visit France. Visa numbers have been cut by half for applicants from Morocco and Algeria, and by 30 percent in the case of Tunisia.

Paris took the latest action, which it concedes is “drastic,” after accusing the African countries of not cooperating in its efforts to repatriate illegal migrants, in spite of agreements concluded in recent years.

For an illegal immigrant to be deported both France and the country of origin must provide documentation – a “consular pass” in the case of the latter.

But according to Interior Minister Gérald Darmanin, lack of cooperation meant that from January to July this year the administration was able to deport to Algeria only 22 out of 7,731 illegal migrants who had been ordered to leave.

Over the same period, France was able to repatriate only 80 Moroccans out of 3,301 who were obliged to leave France, and only 131 Tunisians out of 3,424 who were under orders to depart.

Some African countries are even less cooperative. Mali, for example, has not issued a “consular pass” for three years.

But the government’s focus on Morocco, Algeria and Tunisia appears to be tied to the fact that most illegal migration from Africa flows from or through those countries. Also, most of the terrorists who have carried out attacks in France since 2015 have either been citizens of, or have their origins in, one of the three countries.

“It’s a drastic decision, and unprecedented, but one made necessary by the fact that these countries are refusing to take back nationals who we don’t want or can’t keep in France,” government spokesman Gabriel Attal told reporters earlier.

“We wished that the Maghreb countries would have shown more cooperation with France so that we could enforce our migration rules,” he said. “There was a dialogue, then there were threats, today we are putting the threat into action.”

The Algerian foreign ministry summoned the French ambassador for an official reprimand, saying that the reduction in visas issued had “caused confusion and ambiguity because of its motivation and its scope.”

Algiers then went further, announcing a ban on French military planes using its airspace – a decision that could impact the French counter-terrorism operation in the Sahel region.

Algeria has borders with Mali and Chad, two of the five Sahel countries fighting radical Islamists with French help. It also borders Libya, which has been a source of jihadists operating across the region.

Macron said this week he was seeking ways to calm down the tensions with Algeria.

The government decision to take a tougher line comes amid the campaign for the 2022 presidential election, with immigration an issue being highlighted by some candidates.

A lawmaker with the opposition Republican party, Aurélien Pradié, questioned the timing of the decision, saying his party has been calling for such action for the past five years, with no success.

“It is a little curious that Interior Minister Gérald Darmanin, who has been minister for many months, with the approach of a presidential election suddenly begins to show a little more authority,” he said.

Jordan Bardella, president of the far-right National Rally, said the government decision shows that Macron had failed to keep a 2017 promise “to expel 100 percent of illegal immigrants from our soil.”

Darmanin’s first trip after taking up his ministerial post in July 2020 was to North Africa, where he urged the Tunisian, Algerian and Moroccan governments to take back hundreds of migrants from those countries who were suspected of radicalism.

Figures for the first six months of 2020 show that French authorities granted 63,000 visas for Algerian, Moroccan and Tunisian citizens wanting to visit France – out of a total of 96,000 applications received during that same period.