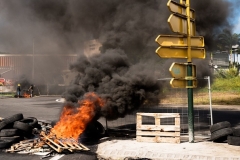 A burning barricade is seen during protests against mandatory vaccination in the French territory of Guadeloupe. (Photo by Carla Bernhardt/AFP via Getty Images)

The use of health passes and mandated vaccines for health personnel sparked protests that began last week on Guadeloupe, with cars and businesses set on fire and stores looted. A general strike has begun, with schools and public services closed on Monday.

Trade unions are also calling for a general strike in the other French territory in the Caribbean, the island of Martinique.

Social problems are seen to be contributing to the unrest. Local lawmakers reminded the central government that one-third of young people on Guadeloupe are unemployed, with jobs scarce.

They say that access to health services is also not as easy and cheap as in mainland France, while incomes are low and the cost of food, health products, gas and clothing – all of which come from France – is high.

These problems have been plaguing the French Caribbean for many years, but unhappiness over compulsory vaccinations for health workers and caregivers spilled over into sometimes violent unrest.

The central government at the weekend deployed 50 members of an elite police tactical unit to Guadeloupe, to bolster 200 police officers and gendarmes sent as reinforcements back in August.

Government spokesman Gabriel Attal told reporters the first priority was to show a firm hand to stop the violence.

“It is an intolerable and unacceptable situation, due to a small minority that is using the tensions around the vaccine and which is now radicalized.”

Of a population of some 400,000, Guadeloupe has recorded a total of almost 55,000 cases of COVID-19 and 822 deaths. A little over 20 percent of the population is fully vaccinated against the virus, three times lower than the national (French) average.

Castex is isolating after contact with COVID-19, and his meeting with Guadeloupe representatives had to be held by teleconference. The French ministers of the interior, health and overseas departments also took part.

In a press briefing afterwards, Castex condemned the violence “with the greatest firmness” and called for life on Guadeloupe to return to normal.

“The demand for firmness must also be accompanied by the dialogue necessary to hear and understand our fellow citizens,” he said.

French President Emmanuel Macron, touring France on Monday to prepare his campaign for re-election, spoke about the situation for the first time since the protests erupted.

“We cannot use the health of the French to wage political battles,” he said. “Law and order must be maintained.”

Macron said there was “a growing adherence to vaccination [on Guadeloupe], despite the opposition of a very small and active minority.”

He called on citizens “not to give in to lies and manipulation.”

Leftist opposition figures criticized the government’s handling of the problems.

Fabien Roussel, who is running for the presidency in next year’s election for the Communist Party, is in the Caribbean and was planning a stop in Guadeloupe.

“The priority is to listen and take into account the realities of these overseas countries before sending elite police tactical units,” he said before visiting.

Guadeloupe is “on fire” and Macron alone is responsible for the situation, the head of the leftist movement Rebellious France, Jean-Luc Mélenchon, wrote on his blog.

Republicans competing for their party’s presidential nomination said during a televised debate that no political leaders have visited the Caribbean island for a long time, and yet the government is now surprised by the events.

One of them, Eric Ciotti, said the situation on the island was comparable to what has been happening in some neighborhoods in mainland France, where “hooligans use all pretexts to protest violently and loot.”

Guadeloupe, Martinique, Saint-Barthélemy and the northern part of the island of Saint Martin are French islands in the Caribbean. Together they had a population of 844,811 in 2008.

Guadeloupe and Martinique are overseas “departments” which have the same status as France’s mainland regions, and French laws apply. The other two are overseas “collectivities,” where local authorities have the power to issue regulations and take administrative decisions.