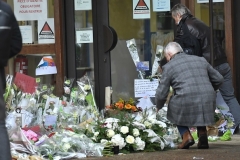 People leave flowers at the school in northwest Paris where teacher Samuel Paty was murdered. (Photo by Bertrand Guay/AFP via Getty Images)

Paris (CNSNews.com) – The French government has requested a leading emergency room doctor to carry out an assessment of the problem of religious radicalization within the hospital system and examine possible solutions to fight radical Islamism in the sector.

Patrick Pelloux, president of the Association of Emergency Physicians in France, confirmed a recent report on the specialized health website Hospimedia, saying that Health Minister Olivier Véran had set him the mission.

He said his task would be to compile data on incidents of radicalization, or attacks on secular values in hospitals, and then propose ways to counter them. He will report back to Véran by the end of 2021.

Pelloux told local media that the plan falls within the framework of government policies to ensure the principle of secularism is upheld in public spaces in France, and “to mobilize major public services to fight against radicalization.”

The government launched the drive in the wake of the murder last fall of school teacher Samuel Paty. In an incident that shocked the nation, Paty was beheaded by a radical Islamist after using caricatures of Mohammed in a classroom lesson about freedom of speech.

Pelloux said similar initiatives have been carried out in the education and public transportation sectors, and within the Interior Ministry.

Outlining his task, Pelloux said he would for example collect testimonies of doctors who have come under attack because certain female patients (or their male relatives) demand – for religious reasons – that they be treated exclusively by women.

He also referred to instances when some male staff members or patients in hospitals refuse to even greet female doctors, nurses or colleagues working in the same establishment.

He will examine whether prayer rooms in some hospitals are standing in for neighborhood mosques in small and mid-sized towns, where community mosques are scarce.

And, Pelloux said, he would check to see whether ostentatious religious symbols or garb are being worn by staff members, patients, or visitors at hospitals. In France, all public places are required to implement neutrality regarding religion.

News of the study stoked controversy, however, with health professionals arguing on social media that the issue of radicalization was a secondary one in the light of overall challenges faced by public hospitals, especially during the coronavirus pandemic.

“Don’t worry man, in hospital you could now die of a heart attack because we have no room, but you need to know that we would all be tracked if a nurse prayed in a hospital hall,” tweeted Sabrina Ali Benali, a physician.

“Expressly, how do you sort between what is linked to radicalization, attacks on secularism, malicious rumors, and racism?” a person who is in charge of general hospital management issues at a hospital in Paris asked Hospimedia.

Speaking to the same website, the director of human resources at another hospital in the Paris region asked, “What exactly is expected from us? We had one-day radicalization training three years ago, and since then nothing. We are left alone regarding this problem.”

Amid the angry response from some in the sector, Pelloux sought to justify his mission by saying, “We know very well that radicalization, in all its forms – from radical Islam to fundamentalist Catholicism – has its favorite ground for proselytizing in [cases of] births, deaths, health – therefore hospitals.”

Hospitals are not the only places where religious radicalism is spreading, according to security sources. At sports associations and sports clubs, recruiters are reportedly active in trying to convert young people to political Islam.

Radicalism has been a rising problem in France in recent years. Around 20 terrorist acts linked to Islamism have taken place since 2015, killing 264 people and injuring hundreds more.