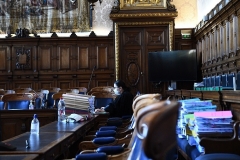 A law court in Paris. (Photo by Anne-Christine Poujoulat/AFP via Getty Images)

Paris (CNSNews.com) – Public prosecutors in Paris have indicted the founder of a website that has stoked controversy by listing Jewish personalities in French society under the heading, “They are Everywhere.”

The website, which is no longer accessible, stated that it was presenting a “duly verified census of French and international personalities” in the areas of media, politics, the economy and culture, each of whom was assigned a short biography and photo. They were all – or mostly – Jewish.

The website’s address, jesuispartout.com (“I am everywhere”), alluded to an anti-Semitic weekly magazine circulating in the 1930s.

Interior Minister Gérald Damanin told reporters that “the group led by Goujon has contravened French law banning all incitement to discriminate against a person or group because of their origin.”

Earlier Pharos, a French platform that enables Internet users to report online content they believe to be illegal, received numerous complaints about the website.

The site was also identified by a Jewish-run blog encouraging people to report antisemitic behavior and speech.

Darmanin, who called the site “deeply scandalous and nauseating,” then announced that he had reported the site to prosecutors to begin legal proceedings.

The online hate division of the Paris public prosecutor's office opened an investigation, leading to the closure of the website and the indictment of its founder.

The website was launched in 2020, and carried links to far-right alt-tech social networks, including in Russia and the United States.

IT experts who have monitored Goujon, an engineer with a master in computing sciences, described him as an enthusiast in free software and cryptocurrencies.

They also discovered that he is very fond of Russia, where he has apparently lived in the past. He has a profile on the Russian equivalent of Facebook, VKontakte (VK).

On this Russian network, frequented by some French far-right activists, Goujon has promoted content from other antisemitic groups and individuals.

The Pharos platform was created in 2009, and is affiliated to the Fight against Crime Related to Information and Communication Technologies, a branch of the judicial police.

If a site is found to promote illegal content, it can be quickly shut down, and charges brought against those responsible.