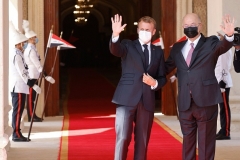 Paris (CNSNews.com) – France will keep troops in Iraq, irrespective of what the United States decides to do, French President Emmanuel Macron said during a visit to Iraq early this week.

“No matter what choices the Americans make, we will maintain our presence in Iraq to fight terrorism,” Macron said in Mosul, a city formerly used the Sunni jihadists of ISIS as the Iraqi capital of their so-called caliphate.

The comments came at a time when the U.S. decision to withdraw all troops from Afghanistan by the end of August necessitated the pullout too of the military personnel of its NATO allies and partners.

Macron’s trip, centered on a regional summit in Baghdad, also took him to Erbil, capital of Iraqi Kurdistan, where he met with its president, Netchirvan Barzani, and with French special forces stationed there.

France launched its anti-ISIS mission, Operation Chammal, in 2014. It comprises around 600 troops as well as a contingent of special forces whose numbers are classified. Some of the troops have been training Iraqi soldiers and instructors, with most based in Baghdad.

In Erbil, Macron expressed France’s determination to continue fighting against ISIS, describing the group as “our common enemy which shows worrying signs of resurgence in Iraq as in Syria.”

Macron pledged that “France will remain in Iraq as long as the Iraqi government wishes, and the security of Iraq depends on it.”

During his visit to Mosul, Macron visited the site of the ancient al-Nouri mosque, where ISIS leader Abu Bakr al-Baghdadi proclaimed the caliphate in 2014. The mosque was destroyed during the battle of Mosul that ousted the jihadists from the town. (ISIS accused U.S. forces of bombing it, but the Iraqi government said ISIS deliberately blew it up, in what Iraq’s then-Prime Minister Haider al-Abadi called the group’s “declaration of defeat.”)

“The caliphate was been founded here, in this place which then was literally ransacked by the same people,” Macron said in a speech in front of the ruins of the mosque. “First, they removed all traces of decoration, the secular Islamic art and culture. And then, when the caliphate was gradually defeated in 2017, they decided on their own to destroy this mosque.”

“It was a terrorist project which was done in the name of Islam, but which is not Islam,” he added.

Macron also visited the Church of Our Lady of the Hour, in Mosul, where he urged Iraqis, whose country has been torn by conflict and social crises for 40 years, to work together. The 19th century Catholic Church was badly damaged during the Iraq War.

The U.N. culture agency UNESCO is involved in a project to rebuild both the mosque and church, with funding from the United Arab Emirates.

The Nineveh Plains around Mosul are the traditional Christian heartland of Iraq, but the war and ISIS occupation pushed the majority of Christians into exile.

Estimates vary, but there are believed to be fewer than 400,000 Christians left in Iraq, compared to roughly 1.5 million before the U.S. invasion in 2003. Many of those who left are reluctant to return.

Macron told reporters during his visit that France’s involvement in the region has aimed at protecting Christians, but also of all minorities, historically very numerous in northern Iraq.

“We don’t forget that it is from this region that the terrorist attacks committed in France in November 2015 were planned,” he said.

Macron acknowledged that the process of rebuilding Mosul has gone more slowly than hoped. According to a local official, 80 percent of infrastructure like roads and sewers have been rebuilt, but only 30-40 percent of health facilities.

Macron said France would reopen a consulate and schools in the city, without giving specifics.

Keen to show respect to all major faiths in Iraq, Macron while in Baghdad visited a Shi’ite shrine, together with Iraqi Prime Minister Mustafa al-Kadhimi.