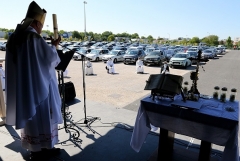 In Chalons-en-Champagne, Bishop Francois Touve leads an open-air Mass on May 17 for some 500 parishioners, sitting in their vehicles. (Photo by Francois Nascimbeni/AFP via Getty Images)

Paris (CNSNews.com) – France’s top court for administrative justice has given the government eight days to lift its ban on gatherings in places of worship, and adherents of the main religions here are waiting to see how it will respond.

During the COVID-19 lockdown, places of worship were allowed to remain open, but as gatherings of more than 20 people were prohibited, many shut their doors. The prohibition affected services as well as events such as funerals.

Although easing of the lockdown began on May 11, with restrictions in many public places lifted, gatherings of more than 20 in churches, mosques, synagogues and temples remain banned.

On Monday the Council of State, which acts also as legal advisor to the executive branch, ordered the government to lift the ban on gatherings in places of worship, “due to its disproportionate nature.”

The court upheld religious organizations’ argument that people have the right to participate corporately under the right to freedom of worship in France.

Plaintiffs included Roman Catholic organizations, the General Alliance against Racism, and the Christian Democratic Party. All welcomed the council’s ruling.

“We are satisfied with the outcome of the interim measures for freedom,” tweeted Christian Democratic Party president Jean-Frédéric Poisson. At the same time, he urged the government to execute the order as quickly as possible.

“This decision is good news for freedom of worship, which is a fundamental right,” tweeted Bruno Retailleau, who heads the Republican group in the French Senate.

The government has yet to respond publicly to the court decision.

Now religious leaders are mulling how to make corporate worship a reality while maintaining the precautions put in place to combat the coronavirus pandemic.

Catholic Archbishop Dominique Lebrun of Rouen told France Inter radio that social distancing would need to be respected, limits set on numbers entering a church, and “gestures” reduced to a minimum, although it will not be necessary to wear a mask during Mass.

The president of the French Council for Muslim Worship, Mohammed Moussaoui, said activities in mosques would be gradually resumed, to allow better control. But he said Muslim leaders do not plan to call people to gather to celebrate Eid, the upcoming feast marking to end of Ramadan.

“We will only analyze the situation when we have health certainties. And for that, we must wait a little longer to judge the effects of deconfinement.”

A representative of the chief rabbi’s office welcomed the court decision, but said the Jewish community was awaiting more details including the exact date when worshippers will once again be welcomed to synagogues, taking their safety into account.

The Jewish feast of Shavuot (Pentecost) takes place this year on May 28-30.

Although some churches remained open during the lockdown, because of the ban on gatherings most places of worship were closed. The rabbi’s office representative said that while a person can visit a church alone to pray, synagogues are places of corporate worship.

In fact, churches stayed open but most of the Protestant temples, mosques, synagogues and other places of worship closed. Representatives of the Chief Rabbi of France told us that synagogues are not like churches were a person can come alone to pray.

As of late Wednesday a total of 28,135 deaths in France have been attributed to COVID-19, the fourth-highest reported death toll, after the United States, Britain and Italy.