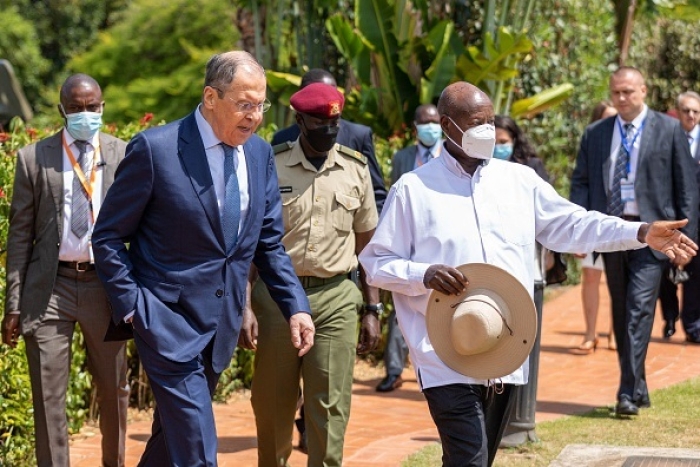 Paris (CNSNews.com) – Russian Foreign Minister Sergei Lavrov arrived in Ethiopia on Tuesday, his last stop of a four-country African tour designed to shore up support for Moscow despite deep concerns about the impact Russia’s war in Ukraine is having on the global food supply.

Elsewhere on the continent, French President Emmanuel Macron began a three-country trip, at a time when France – and the West – are concerned about deepening engagement by both Russia and China in Africa. France has been particularly troubled that some French-speaking former colonies are turning towards Moscow.

Previous stops on Lavrov’s itinerary were Egypt, Uganda, and the Republic of Congo.

In each of his Africa stops, Lavrov gave assurances that the delivery of Russian grain, blocked as a result of the war in Ukraine, would resume. Grain exports from Russia and Ukraine, both important producers, have been affected by the conflict, although an agreement signed in Turkey last week aims to facilitate the shipments.

At a time when the West is leading condemnation of Russia’s invasion of Ukraine, all four African countries visited by Lavrov have signaled ambivalence about Russia’s position.

When the U.N. General Assembly passed a resolution on March 2 critical of the invasion, Uganda and Congo abstained, while Ethiopia did not vote. Egypt was the exception, joining the 141 countries voting in favor of the measure.

And when the General Assembly the following month voted to suspend Russia from the Human Rights Council in response to its invasion, Congo and Ethiopia voted “no” while Egypt and Uganda abstained.

“Russia has found the means to restore its influence on the continent by offering security aid, with fewer conditions than those proposed by the Western countries, to different countries,” European Council for International Relations (ECFR) Africa scholar Theodore Murphy told media this week.

During the Soviet era, Egypt had important strategic and economic ties with Moscow, links that have been maintained since the end of the Cold War. Egypt has also been an important Russian tourist destination, although from the beginning of the Ukraine war, travel to Egypt has been difficult for Russian visitors.

In a column for the Congolese daily Les Dépêches de Brazzaville, Lavrov hailed the importance of Africa in the current geopolitical context.

“Today, African states are playing an increasingly important role in global politics and economics,” he wrote, adding that they were “strongly contributing to addressing key issues of our era.”

In Uganda – where the prices of basic food and fuel have soared in recent months – Lavrov met with President Yoweri Museveni, who praised Russia for “supporting the anti-colonial African movement for the last 100 years.”

Ahead of his trip to Africa, Lavrov told Russia’s TASS state press agency that “developing a comprehensive partnership with African countries remains one of Russia’s top foreign policy priorities.”

He said Moscow was “firmly committed to the principle of African solutions to African problems” and he criticized the “obsolete colonial model” imposed by former colonial powers.

That kind of talk has had an impact especially in the Sahel, where France faces growing anti-French sentiment even as Russia puts itself forward as a strong, alternative security ally.

Instead, he is visiting former French colonies Cameroon and Benin, as well as Guinea Bissau, a former Portuguese colony.

Antoine Glaser, specialist in relations between France and Francophone Africa, told France’s TV5 that Macron in his first term visited countries like Mali or Mauritania, “always in the context of the fight against terrorism.”

Now, however, “Macron must have realized that France was losing its traditional interests in its former African backyard to other states, especially China and Russia,” Glaser said.