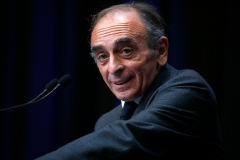 Eric Zemmour has not said whether or not he will run for president. (Photo by Chesnot/Getty Images)

Paris (CNSNews.com) – Presidential elections in France are still six months away, but a far-right politician who has not even declared himself a candidate is making the buzz by taking the second place in several opinion polls.

This week, the latest survey of voting intentions put Macron in the lead with 23-35 percentage points, followed by Zemmour with 17-18 points, just ahead of Le Pen with 16 points.

When Zemmour, 63, publicly raised the idea of a potential candidacy at the end of August, he moved quickly into third place in the polls, behind Le Pen whose numbers at that time ranged between 21 and 26 percent.

In France, if no presidential candidate secures an absolute majority, a second round run-off is held two weeks later between the two candidates who received the most votes.

Le Pen, who made it into the second round in the 2017 election – ultimately won by Macron by a 66.1-33.9 point margin – is hoping to do so again in the next one, scheduled for April next year.

She met this week with Hungary’s far-right Prime Minister Viktor Orban for an interview and joint press conference.

Over the last month Zemmour has also started to hold meetings with right-wing leaders including Orban, who Zemmour praised on Twitter as “a leader who defends his country’s identity, sovereignty and borders.”

Zemmour was also invited to last month’s “Demographic Summit” in Hungary, which brought together nationalist and ultraconservative figures. Le Pen’s niece, Marion Maréchal Le Pen, also attended. (A former member of the National Rally, Marion Maréchal Le Pen is no longer in party politics and now heads a private school that she helped launch in Lyon.)

Although Zemmour would likely attract some voters away from Le Pen, National Rally leaders have told media outlet they are not overly concerned.

They note he has not yet declared an intention to run, and argue that the much more experienced Le Pen will in the end draw followers away from Zemmour and succeed in reaching the second round of the elections.

In fact, some analysts suggest Zemmour may end up attracting more support from the center-right Republicans than from National Rally.

Robert Ménard, the mayor of the southern city of Béziers who is close to both Le Pen and Zemmour candidates, told public radio FranceInfo that the two would be “mad” not to unite rather than both contest the election.

Zemmour accuses migrants from Arab and other non-European countries of being responsible for a growing lack of security in France, and says they should be expelled.

He argues in favor of sovereignty and in opposition to globalization and Islamism, but has not laid out an economic program.

Analysts say that if Zemmour does run, he will likely divide the entire right side of the political spectrum, including National Rally and the Republicans.

The deadline for submitting a candidacy for the presidential elections is only March 4, so there is no hurry for Zemmour to announce.

Any French citizen aged 18 or over can be a candidate, on condition of having obtained the endorsement of at least 500 elected officials. By March 4, the endorsement list has to be submitted to the Constitutional Council for a candidacy to be accepted.

Zemmour is reported to have begun collecting signatures, but how many he has to date remains a matter of speculation.