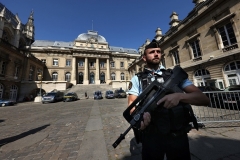 A gendarme stands guard at the main entrance of Paris’ Palais de Justice, the courthouse where the terror trial is due to begin on Wednesday. (Photo by Thomas Coex/AFP via Getty Images)

Paris (CNSNews.com) – France is braced this week for the start of the trial of those accused of carrying out the deadliest terror attack in the country’s history – coordinated gun and bomb attacks over a two-hour period targeting a sports stadium, bars, restaurants and a concert hall in Paris.

One hundred and thirty people were killed and 350 injured in the attacks on the night of November 13, 2015, carried out by three teams of jihadists. ISIS claimed responsibility.

The trial beginning on Wednesday has 20 accused, although only 14 are present. Six others will be tried in absentia.

Those on trial are accused of being accomplices, with some facing criminal conspiracy charges. Others who provided help ranging from supplying weapons to helping them to hide from police, will be charged with terrorist criminal association. Eleven of the 14 are in custody.

Much attention will be focused on the sole survivor among the actual attackers, 31-year-old Salah Abdeslam. He was at large after the attacks until arrested after a shootout with police in Belgium in March 2016. A Brussels court sentenced him to a 20-year prison term for the attempted murder of the police officers during the shootout.

On the night of the attack, Abdeslam left few clues regarding his involvement, having avoided cameras and witnesses.

But he is suspected of having led the three suicide bombers who blew themselves up near the stadium before going to another Paris neighborhood to carry out a further suicide bombing that was unsuccessful.

After allegedly dumping his suicide belt and escaping, he later wrote that there had been a fault with the suicide belt.

Abdeslam is being held in a high security jail located in the small town of Fleury-Mérogis town, south of Paris. He has given little information to prosecutors but survivors of the attack and friends and family of the victims are hopeful that during the trial he will explain his participation and motivation.

Jean-François Ricard, the national anti-terrorism prosecutor who will lead the prosecution has sought to temper those hopes.

“We should not expect much from him,” he told reporters. “In my experience, I have not seen a single terrorist fully explain himself to the court. Either they keep quiet, or they use dilatory arguments, or they are content to speak words of principle, of demand. I have always found that disappointing.”

Abdeslam’s transfer from prison to the central courthouse in Paris will be carried out under high security, using different routes and means of transport as a precaution, according to police.

He is scheduled to appear on the stand in mid-January.

The courthouse can accommodate up to 550 people, including the accused, witnesses and lawyers. The judges will are expected to hear from 300 witnesses, with 150 hearing hours scheduled between September and November.

Among those expected to testify is David Fritz, who was held hostage by terrorists at the Bataclan concert hall, where 90 people were killed.

He told reporters he was initially hesitant to take part.

“Even though I have spent six years telling my story, including in a book, this testimony carries another weight.”

Witnesses will also include then-President François Hollande, who was attending a soccer match at the stadium when the attacks began, and his interior minister, Bernard Cazeneuve.

The trial is scheduled to go into recess on November 13, the sixth anniversary of the attacks, and resume in January, with a verdict expected around May 25.

Silent and Calm, the AK47-Wielding Terrorists of Paris Fired Into the Crowd For ‘Ten Minutes, Ten Horrific Minutes’ (Nov. 14, 2015)