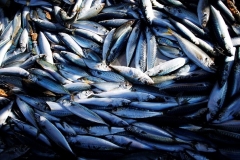 Freshly-caught mackerel lie on the deck of a French fishing trawler. (Photo by Charly Triballeau/AFP via Getty Images)

Paris (CNSNews.com) – French President Emmanuel Macron has put on hold a decision on possible sanctions against Britain as talks continue in a bid to resolve a dispute between the two countries over post-Brexit fishing rights in the English Channel.

British and French ministers met in Paris on Thursday in an attempt to end the row, which has seen France threaten to block access to its ports and impose stricter checks on British fish imports to the continent.

French authorities even raised the possibility of restricting electricity supplies to the Channel Islands – dependencies of the British crown which lie close to the French coast and get most of their power from France.

After the talks between Britain’s Brexit minister David Frost and the French minister for European affairs Clément Beaune, the French government said they would continue next week.

“At the end of the conversations, if no solution is found, Paris will impose sanctions,” said government spokesman Gabriel Attal.

Attal also said that a final decision would be made by the European Commission.

The simmering dispute over a small but symbolic industry clearly escalated last week. France has threatened to bar British fishermen from accessing most French ports, in retaliation for what it says is an insufficient number of licenses granted by London to French fishing boats.

That move, along with a threat for stricter customs controls, has been suspended as attempts to negotiate a solution continue.

Under the deal governing Britain’s exit from the European Union, concluded between Britain and the E.U. at the end of 2020, European fishermen may continue to work in certain British waters, provided they can prove that they fished in those areas previously – specifically, during the 2012-2016 period.

France hopes to get 200 permanent licenses for its boats in British waters, but the two governments are disputing the paperwork required in support of the applications.

“We got only 50 percent of the licenses to which we are entitled,” Attal told media outlets last week.

Britain counters that the dispute involves only a few dozen French fishing boats.

The row comes amid other tensions between France and the U.K., including over migrants crossing the Channel, and the AUKUS security partnership between the U.S., U.K. and Australia, which cost France a lucrative deal to sell conventional submarines to Canberra.

Some observers see the issue in the light of France’s presidential election next year.

The fishing industry, and food industry in general, wields significant electoral influence, and Macron evidently wants to show he is fighting for their rights and their jobs.

The fishing row has yet to feature prominently in the election campaign however, with candidates appearing more concerned about security, immigration and the economy than the fishing issue.

During the G20 summit in Rome last week, Macron spoke with British Prime Minister Boris Johnson but they failed to find a solution to the dispute.

According to a Downing Street spokesman, Johnson has been deeply concerned about French government rhetoric in recent days.

“The two countries want to show their muscles, their sovereignty, especially in matters of economic policy,” Brexit Observatory director Aurélien Antoine told Huffington Post France. “France wants to assert itself on the European scene and Johnson wants to give tangible proof of the advantages of Brexit.”