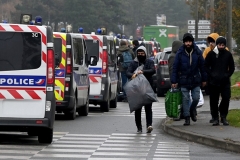 Migrants walk past police vehicles during the evacuation of the illegal migrant camp in Grande-Synthe, northern France, on Tuesday. (Photo by Denis Charlet/AFP via Getty Images)

Paris (CNSNews.com) – As a dispute between France and Britain over illegal migration simmers, French police this week dismantled a makeshift migrants’ camp at the small coastal town of Grande-Synthe, where about 1,500 people were waiting for an opportunity to cross the English Channel.

“We discussed a range of additional steps to tackle the problem and reiterated the importance of working together to make this deadly route unviable.”

But Darmanin staffers told media outlets that the dismantling of the camp at Grande-Synthe had been planned before his talks with Patel.

Darmanin himself has suggested that the British government is using the migrant issue for domestic political reasons. He told Patel that the U.K. “should stop using us as a punch-ball in their domestic politics.”

France has a policy of not stopping, rescuing or bringing back to its shores migrants making the crossing – unless they ask for help – but instead the Navy escorts them safely to British waters.

Britain says that France in this way is shirking its responsibilities.

Last Thursday, British authorities said a record 1,185 migrants had made the perilous journey in just one day.

Police and immigration officials were involved in the Grande-Synthe operation, using around 70 chartered buses to transport the migrants, mostly from the Middle East, to facilities of the Office for Immigration and Integration, responsible for providing temporary housing, meals and medical care where necessary. Makeshift shelters at the site were removed.

According to the office of the socialist mayor of Grande-Synthe, Martial Beyaert, nearly 1,500 people, mostly Kurds, had been living in the camp, set up on a piece of industrial wasteland.

However, word of the imminent police operation had prompted around a third of them to leave before it began. The prefect of the district, Georges-François Leclerc, said about 400 of those who left ahead of the raid were being sheltered elsewhere, mainly by private pro-migrant groups.

Beyaert said a solution needed to be found as winter was approaching.

Human rights activists and some lawmakers criticize the government’s approach to the problem, saying it amounts to harassment and intimidation.

“The state attacks people who have nothing, without ever working on the causes,” said a representative in Grande-Synthe of Utopia 56, an association created in 2015 to help illegal migrants in northern France.

French police regularly raid camps on the country’s northern coast, and migrants are offered accommodation and advised to make asylum requests. Most refuse, however, preferring to await the opportunity to reach the U.K.

For Britain, the problem shows no sign of abating. According to the Press Association, at least 14,100 people have crossed the Channel from France on small boats so far this year – 6,000 more than for the whole of 2020.

U.K. authorities say 22,000 migrants managed to reach England on boats – from France and other points of departure – since the beginning of the year. Three migrants died during the crossing and four are missing.