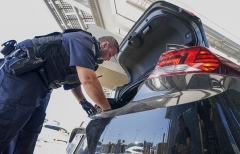 An Immigration and Customs Enforcement agent checks a vehicle for contraband at the San Ysidro port of entry in San Ysidro, Calif. (Photo by Sandy Huffaker/AFP via Getty Images)

(CNSNews.com) – It is a dangerous game of opioid whack-a-mole: When authorities crack down on the illicit flow of one drug from Mexico into the United States, another even more dangerous substance seems to surface.

“In the last twelve months, I have seen a number of overdose cases, where the person isn’t responding at all to the Naloxone, which made us realize this wasn’t fentanyl,” noted a northern California-based anti-drug campaigner, referring to the emergency nasal spray for suspected overdoses of the powerful synthetic opioid.

“And fentanyl wasn’t showing up in blood tests or autopsy reports,” added the activist, who requested anonymity for safety reasons. “We realized this was isotonitazene.”

Indeed, the U.S. quest to curb the import of fentanyl – brewed by cartels south of the border with precursor ingredients shipped in from China, especially Shanghai – has prodded criminals in both Mexico and China to turn to an even deadlier synthetic – and one that remains legal in North America and Europe.

Just last June the Drug Enforcement Administration (DEA ) and Department of Justice characterized “iso” – in an emergency, temporary classification – as a Schedule 1 drug, meaning it will “most likely lead to drug abuse.” Its cousin compound, etonitazene, is classified as a controlled substance in the U.S., but iso is legal given that its structure differs mildly and a case against it has not been brought forward.

“Isotonitazene is another deadly synthetic opioid made in Chinese labs which are contributing to the escalating death rates in America,” said Derek Maltz, a former agent in charge of the DEA’s Special Operations Division. “Intelligence indicates the isotonitazene is being sold through the Internet by the Chinese transnational criminals and they are using networks in Canada as well to import the lethal drugs into the U.S.A.”

“The cartels are interested in making huge profits from drug trafficking, so it’s anticipated they will be distributing iso as well as the fentanyl,” he said. “It’s all about maximizing the profits with the cartels. Since isotonitazene is deadly, this is a very dangerous trend that is very underreported.”

Around the end of 2019 the yellowish powder began to show up in phony pain pills, or mixed in with heroin or cocaine. Chemicals in iso, according to experts interviewed for this article, are often used by pharmaceutical companies and scientists to develop effective pain management medications.

But the experimental compounds are becoming a fatal staple in the rising demand for drugs in the U.S.

According to a 2019 analysis published in the journal Drug Testing and Analysis, iso is deemed to be even more potent than fentanyl, which is already 100 times stronger than morphine.

In Maltz’s view, since iso is not very well known in the U.S., the “Chinese transnational crime groups are beating the system and taking advantage of the weak and antiquated laws in the U.S.”

“They are making these deadly compounds and shipping to customers in several parts of the world,” he said. “Many Americans have died and will continue to die from ingesting these lethal synthetic opioids. The death rates are already off the charts and at record levels.”

The U.S. Centers for Disease Control and Prevention (CDC) reported that as of the 12-month period ending last July, more than 81,000 people died from drug overdoses, the highest annual number ever recorded. There is no breakdown of deaths attributed specifically to "iso."

While specific statistics on lethality are yet to be isolated, Dr. Antonio De Filippo, a Florida-based psychiatry and addiction medicine specialist, told Medical Xpress last year that as of last summer, it was causing at least 40-50 overdose deaths per month.

That figure is believed to have dramatically risen as the coronavirus pandemic drags on, prompting increased health and economic stress, unemployment, and the burden of lockdowns and travel restrictions.

The increased use of iso exemplifies the adaptability of the China-cartel alliance to develop workarounds. Ed Calderon, a former Mexican law enforcement officer and narcotics expert, said a number of routes are still being used to penetrate the southern border, from large tunnels and drone drops to backpack-wearing mules.

Despite the shutting off of many supply routes amid the pandemic, he said, the China-cartel relationship also still flourishes through Manzanillo, a Pacific coast port in central Mexico.

And it’s not just the southern neighbor. Canadian authorities have over the past 18 months intercepted large volumes of counterfeit opioid pills containing iso. Last March, it was discovered in some 1,900 fake tablets, pressed to resemble the Oxycontin-like pain medication Dilaudid.

“China has represented the main direct or indirect, legal or illegal supplier, and Mexico has become a producer, distributor and country of transit of the narcotic since 2013,” according to experts at the Mexico City-based Fortress Risk Management.

Many expect the problem to worsen.

“Mexico does not have the logistical capacities that imply human, technical, technological and financial resources to be able to inhibit the illegal opioid traffic and in contrast,” said the Fortress analysis. “China operates a high volume of exports to different countries through millions of containers, which makes it difficult to inspect each one of them.”