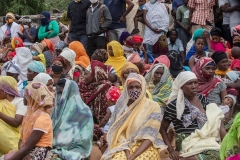 Mozambican families displaced by the carnage in Palma wait to be evacuated by boat late last month. (Photo by Alfredo Zuniga/AFP via Getty Images)

(CNSNews.com) – Military forces in Mozambique said Monday they had re-taken the strategic northern town of Palma from a regional ISIS affiliate that is causing havoc in the southeast African nation, but the progress isn’t coming without bloodshed.

The Pentagon announced last month that a dozen U.S. Army green berets have been deployed for a two-month mission in the area, “to support Mozambique’s efforts to prevent the spread of terrorism and violent extremism.” In addition to training, the U.S. government has also provided medical and communications equipment, it said.

Tens of thousands of civilians have fled for their lives as death count rises in and around the coastal town in Mozambique’s northernmost Cabo Delgado province. Dozens of decapitated bodies were left strewn along roadsides. Children have been indiscriminately slaughtered, and Islamist militants have gone door-to-door, dragging out innocents caught in the crossfire.

International experts are warning of the next “humanitarian catastrophe” – and it’s all down to the so-called Islamic State Central African Province (ISCAP), which has waged a bloody assault against the civilian population for months. Embattled government forces and private militias are engaged in a brutal battle against the insurgents in a bid to win back the impoverished, yet resource-rich region.

The days-long siege in Palma is the latest in a string of vicious, and often coordinated, assaults as the militant group swells in strength and numbers.

The U.S. government estimates that at least 2,300 people have been killed in the conflict over recent months. According to the U.N.'s World Food Program, some 18,000 were displaced due to the insurgency at the beginning of this year, but in three months that figure has ballooned to beyond 700,000, as the militants have overrun strategic towns and terrain far beyond Palma.

“The region is rich in resources that aren’t benefiting the local population, which fueled the grievances of the conflict. ISIS has been very effective at co-opting a local conflict and harnessing the grievances and marginalization in the region under its global brand.”

Raphael Gluck, the founder of the online extremist monitoring site JihadoScope, concurred that the branch was born out of local conditions and feelings of being sidelined by the government – a culmination of chronic unemployment, poverty and minority persecution, exploited by Islamic idealogues for recruitment purposes.

“The rise of ISIS seems to stem from a mix of ISIS affiliation, but built on the foundations of local grievances. ISIS (media and leadership) for their part might have been slow to react because they are looking for something substantial before signing off on something in their name,” Gluck said. “An attack claim, yes, a new venture, expansion of territory and ‘proof’ that the Islamic State is ‘remaining and expanding’ – that’s the official ISIS language – would need something solid like this.”

The growing terrorist scourge threatens to worsen Mozambique’s economic crisis, posing an immediate risk to its cherished oil industry and a mammoth impediment for Maputo. French oil giant Total said last week that it would be halting the reopening of its operation in the area, which was already on hold due to the violence.

“The impact on the oil and natural gas industry is incredibly significant, particularly on the natural gas sector,” noted Caleb Weiss, research analyst at the Foundation for Defense of Democracies’ Long War Journal.

“For example, Total suspended its LNG project in Cabo Delgado, which was worth an estimated $20 billion. Other smaller projects will also likely be halted for the immediate future.”

ISIS defines ISCAP as a unified ISIS-associated presence in central, eastern and southern Africa, although the U.S. government regards what it calls ISIS-Mozambique as a distinct group. In early March the State Department designated ISIS-Mozambique (and another ISCAP-related element, ISIS-Democratic Republic of Congo) as a terrorist entity, paving the way for U.S. forces to begin training Mozambican marines.

The Pentagon announcement of a modest special forces mission then followed.

Some analysts doubt the U.S. contribution will make a dent, however.

“The Mozambican military and government would need more than 20 troops to see any tangible difference,” said Weiss. “It is quite clear that Mozambique will need significant help as they cannot currently deal with the raging and growing insurgency effectively.”

It remains to be seen what impact the ramped-up U.S. military effort will have. Some analysts say it could be effective in countering Russian involvement in the country. Among those on the ground are members of the Wagner Group, a Russian private military contracting agency believed to have close links with the Kremlin.

“I don’t really think ISCAP threatens U.S. national security, but it definitely threatens U.S. interests,” Weiss added. “But if the violence begins to threaten other countries in East or Southern Africa, then this is a big challenge to the U.S.”