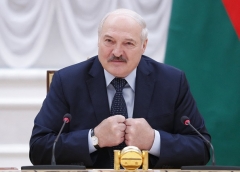 (CNSNews.com) – The Lukashenko regime in Belarus said on Tuesday a raft of coordinated sanctions announced by the European Union, United States, Britain, and Canada “borders on the declaration of an economic war.”

“The European Union is deliberately unleashing a spiral of sanctions, from which it is becoming increasingly difficult for all sides to get out,” the Belarusian foreign ministry said in a statement.

“The retaliatory measures that the E.U. forces us to take will just as negatively impact cooperation and, ultimately, the interests of the citizens and companies of Western countries that have taken unfriendly steps towards our state,” it said, without elaborating.

Monday’s joint announcement by the E.U., U.S., Britain and Canada linked the sanctions to the regime’s forcing of a commercial plane to land on its territory on May 23 so it could arrest an exiled dissident onboard.

“We are united in our deep concern regarding the Lukashenko regime’s continuing attacks on human rights, fundamental freedoms, and international law,” it said, calling to Minsk to cooperate with an international investigation into the forced landing and to “release all political prisoners.”

The passenger flight from Greece to Lithuania was diverted to Minsk over an alleged bomb threat. No bomb was found, but Belarusian activist Raman Pratasevich and his companion Sofia Sapega were arrested. Western governments called the incident a “hijacking.”

The new E.U. sanctions target 78 Belarusian individuals and eight entities, bringing the total number of those targeted by the bloc in Belarus to 166 people and 15 entities.

Those designated include the defense minister, transport minister, air force chief, and air traffic control chief, deemed responsible for the forced landing. One of President Alexander Lukashenko’s sons and his daughter-in-law are also listed.

The sanctions entail a travel ban across the E.U., asset freeze and prohibition on E.U. citizens and companies on providing funds to those listed.

The E.U. imposed a previous round of sanctions after Lukashenko, who has ruled the former Soviet republic since 1994, claimed a landslide victory in August elections viewed as fraudulent by the West. Mass protests prompted a heavy handed crackdown, and opposition leader Tsikhanouskaya fled the country.

The U.S. sanctions similarly include asset freezes and travel bans on 46 officials for “undermining or injuring institutions in Belarus,” and on a further 16 individuals and five entities for involvement in the election and crackdown.

Natalia Koliada, a Belarusian opposition activist in exile in London, said the sanctions did not go far enough.

Koliada, strategy director of the NGO Creative Politics Hub, told EU Observer at least 20 more regime supporters should have been included, along with family members. Otherwise, sanctioned individuals could simply transfer assets to evade the measures.

E.U. foreign ministers meeting on Monday agreed that further sanctions, targeting key sectors like banking, oil, tobacco and the potash industry, would be discussed with heads of state later this week

Belarus exports 20 percent of the world’s supply of potash, a major source of foreign currency.

The E.U. is Belarus’ second largest trade partner, representing 18 percent of the country's overall trade in goods. Number one, Russia, accounts for 40 percent of exports and 55 percent of imports.

Russia has not formally responded to the latest round of sanctions against its ally, although last month it pledged to provide a $500 million loan instalment by the end of June.

On Friday, Foreign Minister Sergey Lavrov said Moscow was working to boost its interactions with Belarus amid “serious external pressure” being put on both countries based on “illegal unilateral containment tools.”