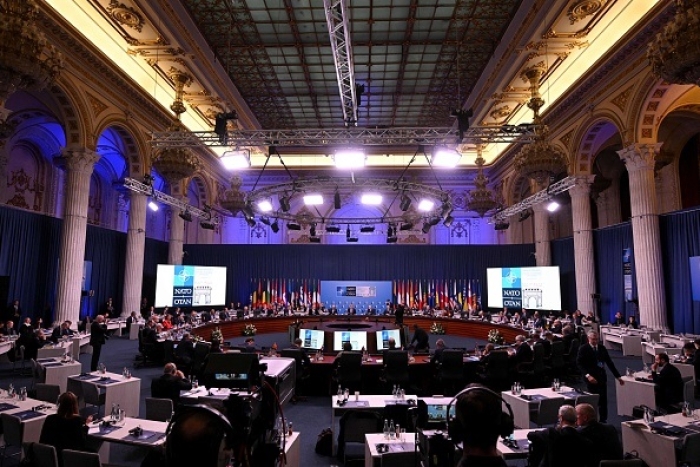 “The war in Ukraine has demonstrated our dangerous dependency on Russian gas,” NATO secretary-general Jens Stoltenberg told reporters Wednesday after the two-day meeting.

“This should also lead us to assess our dependencies on other authoritarian regimes, not least China. For our supply chains, technology or infrastructure.”

Stoltenberg said NATO allies would continue to trade with China but need to be “aware of our dependencies” and “reduce our vulnerabilities.”

“The members of our alliance remain concerned by the PRC’s [People’s Republic of China] coercive policies, by its use of disinformation, by its rapid, opaque military build-up, including its cooperation with Russia,” he said on Wednesday.

“But we also remain committed to maintaining a constructive dialogue with China wherever we can, and we welcome opportunities to work together on common challenges.”

German Chancellor Olaf Scholz said in Berlin on Wednesday that Stoltenberg would be asked to “set up a coordination office for the protection of underwater infrastructure.”

The two-day meeting saw the foreign ministers of NATO aspirants Finland and Sweden join for the first time. The alliance also pledged support for Moldova, Georgia and Bosnia, three non-members which Stoltenberg said were facing pressure from Russia.

“Allies agreed to step up our tailored support, including on capacity-building, reforms, and training to improve their security and defense institutions,” he said of the three.

The efforts include a defense capacity building program and the establishment of a NATO facility in Sarajevo.

Lithuanian Foreign Minister Gabrielius Landsbergis, whose country will host next year’s NATO leaders’ summit, said the alliance expects “significant progress in strengthening our forward defense and the security of the whole eastern flank” before the Vilnius gathering next summer.

Support for Ukraine, no membership moves yet

NATO members have to date ruled out supplying long-range missiles or other offensive weaponry to Ukraine, amid concerns it could escalate the conflict with Russia.

However, some members have urged the alliance to go further, with Estonian Foreign Minister Urmas Reinsalu calling on NATO partners to pledge one percent of their GDP to military support for Ukraine.

“I hope that in the future we can celebrate Ukraine receiving an invitation to become a NATO member,” said Reinsalu.

Fourteen years ago NATO members – at a summit also held in the Romanian capital – could not reach consensus in providing Ukraine and Georgia with “membership action plans” (MAPs) putting them on a formal path to join the alliance.

The U.S. pushed at the time for MAPs for Ukraine and Georgia, but opposition came from a group of allies heavily reliant on Russian energy, including Germany and France.

Instead, NATO agreed that that two “will become members” at some future, unspecified date, a pledge that has been repeated at almost every NATO summit since, but with little actual progress made.

In a statement issued during this week’s meetings, the foreign ministers said, “We firmly stand behind our commitment to the alliance’s open door policy.”

“We reaffirm the decisions we took at the 2008 Bucharest summit and all subsequent decisions with respect to Georgia and Ukraine.”

Stoltenberg said while the alliance stands by the 2008 decisions, “the main focus now is on supporting Ukraine, ensuring that President Putin doesn’t win.”

Asked whether Ukraine had earned entry into NATO, Stoltenberg made clear that prevailing in the war with Russia would be a requirement, for that to be “at the table.”

But Ukrainian Foreign Minister Dmytro Kuleba said the end of the war in his country should not be a precondition for progress in his country’s bid to join the alliance.

“I am speaking about the necessity to start a discussion of how to deal with our application,” he said. “There is a specific procedure. And we should not just sit still and do nothing until we win.”

“The wording contained in the document indicates that NATO is absolutely not interested in a political and diplomatic solution in Ukraine,” she told reporters in Moscow, without elaborating.