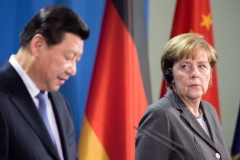 Berlin (CNSNews.com) – German Chancellor Angela Merkel on Wednesday voiced support for a stalled investment agreement between the European Union and China, while recognizing “considerable difficulties” in getting it finalized.

Merkel’s comments came ahead of a planned call between European Council president Charles Michel and Chinese President Xi Jinping, aimed at addressing tensions over Xinjiang and Taiwan, which have held up ratification of the investment agreement.

The European Parliament last May voted by a large margin to suspend ratification of the agreement, which had been negotiated over a seven-year period, after Beijing imposed sanctions on ten E.U. politicians and four institutions in Europe.

China took that step in response to the E.U. joining the U.S. in imposing sanctions against Chinese officials for abuses against ethnic minorities in the Xinjiang region.

In a speech to the Asia-Pacific Committee of German Businesses, Merkel expressed support for concluding the agreement with Beijing, but also said the E.U. must diversify – look beyond China when it comes to trade deals in the Asia-Pacific, and work to conclude pending agreements with Australia and New Zealand.

There have been 11 rounds of talks on a deal with Australia, but a planned 12th round was postponed early this month, over French anger that Canberra canceled a lucrative submarine contract in favor of the new security arrangement with the United States and Britain, known as AUKUS.

A sixth round of talks on an  E.U.-New Zealand free trade agreement was held in July.

Merkel is set to end her 16-year term as chancellor following September elections which saw her Christian Democrats receive a historically low vote. The center-right CDU and center-left Social Democrats are both trying to form a workable coalition with smaller parties.

The election result all but guarantees that the Greens and Free Democrat Party, both of which hold tougher views on China than Merkel’s CDU, will form part of an envisaged new coalition government.

China is an important trading partner for Germany, second only to the United States according to the German statistics office. Merkel has traditionally refrained from overt criticism of Chinese policies.

But international criticism over China’s conduct has grown in recent years, particularly over treatment of the Uyghur Muslim minority in Xinjiang, a crackdown on democracy in Hong Kong, and tensions over the status of Taiwan.

Some E.U. members have taken stronger stances on China of late. Recently, Lithuania allowed the Taiwanese government to open a representative office under the name “Taiwan,” sparking a row and prompting Beijing to recall its ambassador in protest.

A meeting of the E.U.’s 27 leaders last week discussed “rebalancing” ties with China, with foreign policy chief Josep Borrell pledging that the E.U. would deal with Beijing “from a position of unity and strength.”

Reinhard Bütikofer, a member of the European Parliament and among those targeted for Chinese retaliatory sanctions in May, said the planned Michel-Xi call on Friday was “a signal that Beijing begins to understand an important lesson: they can’t make real progress by just talking to individual member states’ leaders.”

Meanwhile Maria Demertzis, deputy director at Bruegel, a European think tank specializing in economics, said the new AUKUS arrangement was a reflection of dwindling U.S. patience with the E.U. when it comes to building ‘like-minded’ alliances to pursue its strategic goals.

“In the U.S., it may be true that the ‘American first’ narrative is no longer present, but it has been replaced by one of ‘strategic retrenchment’: retreat and reconsider then regroup with all those whose interests and motives are aligned with those of the U.S.,” she wrote in an analysis.

However, “Europeans do not want to be in the middle of any emerging ‘cold war’ between the U.S. and China,” Demertzis said. “The E.U. wishes to engage with China as a major trade and investment partner, so at the very least wishes to remain neutral.”

“The E.U.’s talk of ‘strategic autonomy’ shows its willingness, at least, to go it alone when it does not get what it wants,” she said. “It remains to be seen how this will play out.”