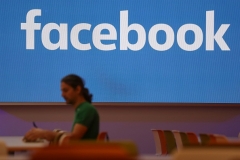 An employee in the canteen at Facebook’s London headquarters. (Photo by Daniel Leal-Olivas/AFP via Getty Images)

Berlin (CNSNews.com) – The European Union suggested on Tuesday that member-states should implement existing copyright rules to require tech giants to share revenues with publishers, as Australia is seeking to do.

The Australian government announced the same day that it had reached a “compromise” with Facebook, after introducing last-minute changes to its controversial revenue-sharing legislation, which Facebook had protested by blocking all news-sharing on its platform in Australia. The government gave platforms more time to strike deals with publishers, and Facebook backed down from its news blackout.

Responding to calls for similar provisions in the E.U., the bloc’s digital affairs officer, Margrethe Vestager, said the E.U. already has provisions in place, but member-states had been slow to ratify them into national law.

“We’ve already covered this in the Copyright Directive,” she said during a debate in the European Parliament. “The copyright legislation – where actually as a publisher you have a right to get paid for your content – has only been fully transposed so far in France. And they are actually moving forward with agreements between publishers and some of the platforms.”

The directive referred to by Vestager was adopted by the E.U. in 2019. One of its articles requires online content providers to get a license for sharing “snippets” of content, although to date only France has attempted to apply it.

France’s attempt to apply the new law, targeting Google in its case, met with a similar challenge last year, with the tech giant circumventing the rules by announcing it would omit “snippets” and only display headlines in its French search results.

The country's competition agency ruled against Google in April 2020, forcing it to pay French newspaper groups a reported $76 million over the next three years. On Tuesday, however, French antitrust investigators accused Google of failing to comply with the orders.

The challenges experienced in France may indicate why Google had not fought the Australian code. Instead, unlike Facebook, it immediately began negotiating deals with media publishers in Australia.

In similar vein, Facebook may have taken note of Google’s struggles in Europe; it announced on Monday that it has started negotiations with publishing groups in France, Germany and Britain.

Vestager’s comments came after a joint call by Microsoft and four European media groups for the E.U. to adopt “Australian-style arbitration mechanisms.”

The groups insisted that E.U. provisions, existing and proposed, were not enough.

“Although press publishers have been granted a neighboring right in the E.U., negotiations with such gatekeepers will not produce fair outcomes unless additional regulatory measures are brought forward,” their joint statement said.

The signatory groups said they had already started working on their own “solution to ensure that Europe’s press publishers get paid for the use of their content.”

“I am convinced that governments across Europe – and in Brussels – should study Australian legislation carefully,” he said. “The European Commission has the ability to address the imbalance and lack of competition in these markets.”

Smith noted that the U.S. was also working on similar provisions. “Congress is currently working on laws that will enable publishers to join forces and negotiate together,” he said. “Which is ultimately based on the Australian way.”

Last Sunday, Vestager said in an interview with Welt am Sonntag that the E.U. has proposed coordination with the U.S.

“Americans fear Big Tech as much as we do,” she said. “I expect a lot from President Biden. The E.U. has already proposed cooperation with his government.”

Canada has also backed the Australian code and indicated it will be working with some European countries to implement a common front.

Prime Minister Justin Trudeau said Tuesday he would be “coordinating efforts” with Australia to adopt a similar model.

Earlier, Canadian Heritage Minister Steven Guilbeault said he had been in talks with France, Germany, and Finland, and that further countries may join the initiative.

“It was the first ministerial meeting where we jointly started talking about what we want to do together regarding web giants,” he said. “Is Facebook going to cut ties with Germany, with France, with Canada, with Australia and other countries that will join? At a certain point, Facebook’s position will be completely untenable.”

A 2020 report by the Reuters Institute for the Study of Journalism found that 40 percent of surveyed participants in the U.S. and 50 percent in Britain said “nothing could persuade them to pay” for news. In Australia, just 14 percent of users paid for online news over the year while in Europe the numbers were even lower: 12 percent in Spain, 10 percent in Germany and France, and seven percent in Britain.