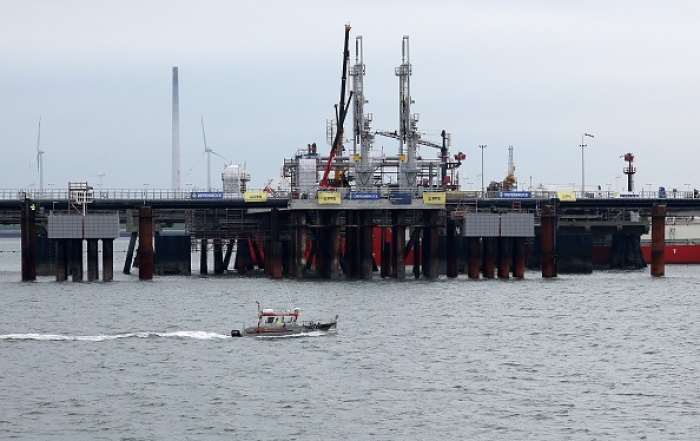 The newly-completed LNG terminal in Wilhelmshaven, Germany, the first of five planned for completion by late next year. . (Photo by Adam Berry/Getty Images)

Berlin (CNSNews.com) – A first storage tanker for liquefied natural gas is heading to Germany, days after the country completed the construction of its first LNG terminal, a key element in its plan to end its dependency on Russian natural gas.

The 280-meter “Neptune” set sail from Wales on Wednesday, headed for the German Baltic Sea port of Lubmin where it will be stationed as a floating terminal to convert imported LNG back into a gaseous state.

The Lubmin terminal is expected to be “technically ready” for up to 4.5 billion cubic meters (bcm) of deliveries by December 1, Stephan Knabe, head of the supervisory board of project operator Deutsche Regas, told the German press agency on Thursday.

Another ship is expected to arrive in December at the northern port of Wilhelmshaven, where on Tuesday Germany announced completion of its LNG terminal, with a capacity of 7.5 bcm.

“This terminal is a significant building block for Germany’s supply security,” Christian Janzen, project leader at the Wilhelmshaven terminal for gas importer Uniper, said on Wednesday. “With this, we can import about eight percent of German natural gas consumption.”

A third terminal is expected to be completed in the port city of Brunsbüttel early 2023, followed by fourth and fifth terminals in Stade and Wilhelmshaven later in year. Each will have a capacity of at least 5 bcm.

Together, the German government hopes the terminals will replace 50 to 60 percent of Russian gas imports.

Gas makes up just over a quarter of Germany’s energy use. Almost all is imported, with Russia accounting for 55 percent of the imports in 2021.

After Russia’s invasion of Ukraine, that figure declined to 26 percent by June 2022, according to a World Economic Forum report. Supplies then ceased altogether when Russia over the summer closed the Nord Stream pipeline for maintenance, and then kept it closed following a suspected sabotage attack in October.

In the meantime, Germany has been getting natural gas from France since mid-October, and this week it achieved its goal of having its gas storage facilities reach 100 percent.

In another move aimed at securing energy supply, Germany earlier this week announced it was nationalizing the former German subsidiary of Russia’s Gazprom – after placing it under German government control months ago – and renaming it Securing Energy for Europe (Sefe).

The Economy Ministry said in a statement on Monday Russia’s halting of gas supplies had pushed the operator company to the verge of bankruptcy, which could “jeopardize the security of supply in Germany.”

“In order to avert this danger and permit Sefe to maintain its business, the change of ownership has been completed and the company stabilized,” it said.

The change will facilitate the search for new suppliers and investors who were reluctant to engage while the ownership structure was unclear.

In conjunction with Germany’s LNG push, the government is also looking at carbon-neutral “green hydrogen,” as a long-term solution, with Development Minister Svenja Schulze this week announcing $572 million in green hydrogen investments, rising over time to $2.59 billion.

Christian Meyer, environment minister for Lower Saxony state, where the Wilhelmshaven terminal is located, said the port will have a dual strategy, bringing in LNG for short-term supply but with further development accepting low-carbon energy sources such as hydrogen.

Looking abroad for this energy source, Germany has opened “hydrogen diplomacy” offices in countries such as Saudi Arabia and Nigeria, and last month signed agreements with Egypt on both green hydrogen and LNG.

Despite the recent successful strides, not all are convinced that Germany is in the clear just yet.

“Many have been touting Germany’s gas reserves as a possible salvation from a disastrous winter,” Tim Davies, head of research at Holon Global Investments, wrote in an op-ed for Livewire Markets. “But a close look at the situation clearly debunks any notion that these reserves can solve their gas crisis.”

Davies said that 40 percent of storage volume needs be set aside to ensure a minimum level of gas pressure to allow extraction. With the Nord Stream pipelines out of operation, heavy reliance on reserves could cause a drop below this “cushion gas level” that would disrupt gas flows.

“The gas grid was never designed to rely almost exclusively on gas reserves,” he said. “A disaster looks certain this winter as reservoir pressure declines.”