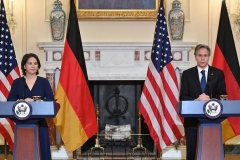 Secretary of State Antony Blinken and German Foreign Minister Annalena Baerbock speak to the press at the State Department on Wednesday. (Photo by Mandel Ngan/ Pool/ AFP via Getty Images)

“That’s not just the position of the United States and Germany. It’s the collective position of many countries, allies and partners that have come together,” Blinken said after a meeting with Baerbock centered on the tensions in eastern Europe.

On her first official visit to the U.S. since assuming her post last month, the German foreign minister said that “the joint message sent by Europeans and the U.S. administration is unmistakable: Russia’s activities come with a clear price tag, the only way out of the crisis is via dialogue.”

Tensions over a Russian troop buildup near Ukraine’s borders, and Russian demands for far-reaching concessions from NATO, have led to a flurry of diplomacy that will include three major meetings in Europe next week.

U.S.-Russia strategic stability dialogue in Geneva on Monday will be followed later in the week by a NATO-Russia Council meeting in Brussels, and a meeting of the Vienna-based permanent council of the 57-member Organization for Security and Co-operation in Europe (OSCE).

Before that, Russia, Ukraine, Germany, and France will hold so-called Normandy Format talks on Thursday, focused on the conflict in eastern Ukraine, where government forces are confronting Russian-backed separatists.

The Biden administration has stated repeatedly that it will not discuss with the Russians issues that affect Europe, without the involvement of the Europeans.

Despite that, concerns have been voiced in the E.U. that matters impacting Europe’s security could be discussed without E.U. input. As he started a three-day visit to Ukraine on Tuesday, E.U. foreign affairs chief Josep Borrell said the E.U. “cannot be a neutral spectator in the negotiations.”

Baerbock emphasized in Washington that “there could be no decision on security in Europe without Europe.”

“Even if the formats of the talks vary, our messages as transatlantic partners to the government in Moscow are always the same,” she said.

(Alluding to such concerns, the State Department stressed earlier this week that the U.S.-Russia meeting on Monday will focus purely on “bilateral matters.”)

At home Baerbock and Chancellor Olaf Scholz appear to have differing outward approaches to the Russian “challenge.”

Baerbock and her Greens party have been more vocally critical of Russia than have Scholz and his Social Democrats (SDP), in particular opposing its Nord Stream 2 natural gas pipeline, now complete but pending German regulatory approval.

Baerbock stressed on Wednesday that Germany and its European partners would take “effective measures” if Russia should “use energy as a weapon or should further aggressive actions take place.”

Scholz, however, has portrayed the pipeline and pending approval process as an apolitical, private-sector matter.

Fueling the sense of differing approaches within the new ruling coalition, German media recently reported that Scholz was seeking a “qualified new beginning” with Russia, and planned to meet with President Vladimir Putin this month.

While Baerbock has spoken of the importance of Germany “speaking with one voice” on foreign policy, the SDP’s parliamentary leader, Rolf Mützenich, said in a radio interview last week that the country’s foreign policy “will be driven by and conceived in the chancellery” – the implication being that the chancellor, not the foreign minister, will set the agenda.

German Marshall Fund fellow Markus Ziener said that at this early stage in the new government, the question of who is in charge of key foreign policy issues has not yet been settled.

“While the Greens and Foreign Minister Annalena Baerbock favor a values-based approach stressing human rights and speaking out against the suppression of democratic forces, the Social Democrats and Scholz pursue a more pragmatic line,” he said.

“The question of who eventually will have the final say on foreign policy issues like China and Russia could become the first major litmus test for the unity of the new government,” Ziener said.

Regarding E.U. concerns of being left out of the upcoming talks on European security, Ziener said it was important to maintain unity.

“The unity of the Western world after the annexation of Crimea in 2014 was a major factor in pushing back Moscow,” he said. “Putin surely did not expect this united approach and was hoping he could drive a wedge into the Western alliance.”

“There should be no deviation from this line now.”

Ziener said the need for a clear, unified approach was particularly important given recent irritations arising from the troop pullout from Afghanistan, and France’s unhappiness over the formation of a new security partnership between the U.S., Britain and Australia. The move cost Paris a lucrative deal to sell conventional submarines to Canberra.

“In both cases, America’s allies did not feel they were properly consulted,” said Ziener.